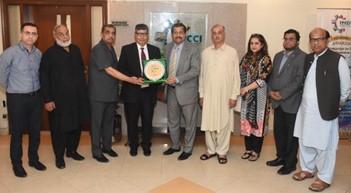 Pakistan Ambassador designate to Japan visited FPCCI before resuming his office at Embassy of Pakistan Tokyo, Japan for interaction with the apex body of trade and industry in Pakistan. The meeting was attended by Dr. Mirza Ikhtiar Baig, Senior Vice President FPCCI who discussed about the declining trade volume between Pakistan and Japan.

Dr. Baig said that the bilateral trade volume between Pakistan and Japan is over 3 billion dollars out of which around 2.5 billion dollar is exports from Japan to Pakistan mainly machinery and automobile products. He also said that Japan in an active trading partner of Pakistan and used to be the biggest buyer of cotton yarn from Pakistan. He recommended to promote exports of Pakistani fruits, vegetables and seafood products mainly Tuna Fish. He advised the need for visit of sectoral delegations to enhance Pakistan’s exports to Japan.

The Ambassador designate has served the diplomatic mission of Pakistan in Tokyo four times and served as the Additional Secretary (Asia Pacific) Ministry of Foreign Affairs, Pakistan. Being well versed with the Japanese language, Mr, Imtiaz has good insight on the bilateral trade between the two countries. He informed that there exists a great potential of re-location of industries from Japan to Pakistan in Special Economic Zones under CPEC. He welcomed the idea of exchange of trade delegations and conducting technical training courses in Japan. He also informed that he would also put his best efforts in negotiating concessional tariff for Pakistani products for the enhancement of Pakistan’s exports to Japan.