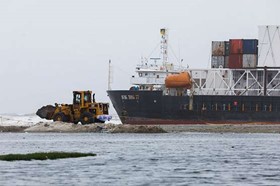 The rescue operations send positive signals to the world that Pakistan can perform such functions, with the strong backing of local shipping agents. Still, we need some polishing of our team for a quick response with adequate logistic supports of heavy equipment and tugs, particularly for operation in the low draft of the beach area. The Joint venture with foreign expertise would add additional grooming of our experts.

The vessel Heng Tong 77 came into the territorial waters of Pakistan for a crew change without intention to enter the KPT Harbor. Later, the ship lost anchors due to extremely rough weather and ineffective engines, drifted towards shallow waters, and beached at Seaview.

Meanwhile, the owner of Heng Tong 77 immediately appointed Capt. Asim Iqbal of Bahria Maritime Services (Pvt) Ltd as an agent in Pakistan to oversee the rescue operation. It follows the appointment of Seamax Marine Group to refloating the beached ship. The vessel was carrying 118 tons of bunker fuel. The agent hired a contractor who successfully retrieved over 80 tons of fuel without any spill.

Furthermore, Pakistan Maritime Affairs Ministry has formed a six-member Fact-Finding Committee to investigate the grounding of barge Heng Teng 77 at Seaview Beach in Karachi on July 21.

According to Capt. Asim Iqbal of Bahria Maritime Services (Pvt) Ltd, Mercantile Marine Department, the subordinate office of the Directorate General, Ports and Shipping, Ministry of Maritime Affairs, Government of Pakistan had approved the salvage/refloat plan of the grounded barge Heng Tong 77 on Aug 7. However, till writing this article, the vessel remains grounded. The Pakistan authority has detained the ship on the question of the ship’s seaworthiness as per IMO rules.

A sense of insecurity among the crew and safety of the vessel was created when a large number of people reached the ground site of the ship on Aug 14. Reportedly, welding equipment, heavy chains and other stuff used in salvage operations were stolen but later recovered by the police. The security around the ship relaxed on Aug 13 due to the postponement of the rescue operation and other reasons which were not disclosed.

The vessel arrived in Karachi anchorage for a crew change; one of its anchors was broken due to rough sea and swelled at 1620 hrs, UTC, Jul 21. The vessel was on one anchor, which also broke subsequently, and it started drifting. Finally, the ship ran aground on a beach in the Karachi area, Pakistan, in position lat 24 47 58.4N, long 67 01 22.0E, in the morning of Jul 21. So far, reported no pollution.

The PMSA’s Maritime Rescue Coordination Centre received a report that Merchant Vessel (MV) SUVARI H, which had sailed from Kandla, India, for Bossasso, Somalia, got stranded approximately 180 nautical miles south of Karachi along with 18 crewmembers onboard. The vessel was a General Cargo, built thirty years ago and was sailing under the flag of Gabon. The Pakistan Navy, in coordination with the PMSA, immediately tasked ships and aircraft to assist to the stranded ship and save precious lives.

After arriving at the scene, the Pakistan Navy and PMSA aircraft dropped life rafts to assist the stranded crew at sea and coordinated their recovery through nearby Merchant Vessel MT ELAN VITAL. The Pakistan authority recovered fifteen crew, but three crewmembers still missing. Nevertheless, the ship was drowned in the sea in late July this year.

The Liquefied Petroleum Gas Carrier Gas Yoda was about to ground when PMSA and other stakeholders rescued it and safely towed it to Karachi Port on Aug 14. It is an LPG Tanker registered and sailing under the flag of Panama.

According to Karachi Port Trust (KPT), Liquefied Petroleum Gas Carrier Gas Yodla remained at the container berth of South Asia Pakistan Terminals Limited. The vessel had to repair the engine and fix both anchors lost earlier in the Arabian Sea. A submission from the ministry of the maritime affair of Pakistan says that the vessel was stranded 52 NM from Karachi port due to engine failure & both anchors were lost and was about to ground on Aug 11. However, the Pakistan Maritime Security Agency (PMSA) had rescued it and towed it to Karachi port. The vessel, which had sailed from Mumbai, was heading Jebel Ali of Dubai (UAE).

A local shipping agent, “M” International Services (Pvt) Ltd, is looking after the repair of Gas Yodla, and the vessel would sail from KPT as soon as it completes the repair.