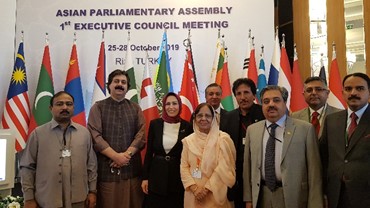 Addressing the concluding session, Senator Hidayatullah, highlighted that 27th October was commemorated as Kashmir Black Day in Pakistan and throughout the world. “Seventy-two years ago on this day, India airlifted its forces into Jammu & Kashmir and forcefully occupied the territory and this occupation continues till today,” said Senator Hidayatullah. He said India has deployed more than 800,000 occupation forces in Jammu & Kashmir who are committing worst kind of human rights violations against innocent Kashmiri men, women and children. He urged the world community and APA Member States to ask India to stop its communication blockade, end its curfew and respect fundamental human rights of the Kashmiri people including basic right to self-deamination. He also reiterated Pakistan’s unflinching moral, political and diplomatic support to the people of Kashmir until the realization of their right to self determination as per the UN Security Council Resolutions through a plebiscite.

APA consists of 42 Member Parliaments and provides a forum to parliamentarians to exchange views, ideas and experiences for developing common strategies for promotion of peace development and cooperation in Asia and the world. Pakistan has been at the forefront to make APA as a vibrant parliamentary forum of the region and remained as APA President during 2013-15.

The Executive Council shall propose full membership of the State of Qatar and Democratic Republic of Timor-Leste to the APA Plenary session expected in December 2019. The meeting also considered draft resolutions proposed by the standing committees on social & cultural affairs, economic & sustainable development, political affairs, and budget & planning. Nominations for APA President and Vice Presidents for 2020-21 and 2022-2023 were also discussed.

On the sidelines, Pakistan delegation held meeting with the Speaker of the Shura Council of Qatar Ahmed bin Abdullah bin Zaid al-Mahmoud. They discussed ways to promote Pakistan-Qatar Parliamentary ties. They also met other parliamentary delegations participating in the event.