Mr. Saleem Mandviwalla, Deputy Chairman Senate, who is leading a 6-member Parliamentary delegation of Pakistan to the 3rd Meeting of the Speakers of Eurasia Countries’ Parliaments (MSEAP), highlighted Pakistan’s commitment to sustainable development and economic cooperation.

Delivering his speech at the plenary session of this key parliamentary gathering, Saleem Mandviwalla said that presence of a large number of Parliamentary delegations from 40 countries across the Eurasian region representing over 4 billion people is a testimony to the increasing role of Parliamentary diplomacy towards achieving peace and prosperity in global politics. Saleem Mandviwalla said environment is not only national and regional issue, but a global responsibility. He warned that climate change is a threat to the very existence of life on our planet and urged to accord environmental issues a high priority in policy formulation in line with the Sustainable Development Goals (SDGs). Continued world economic growth should be pursued in environmentally sustainable ways alongwith improving the economic performance of least developed countries and at the same time aiming to achieve significant reductions in the incidence of poverty through increased economic 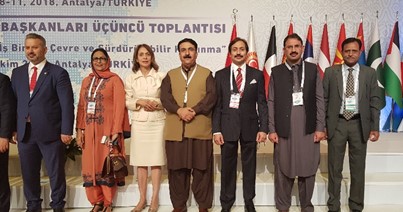 “Sustainable development” is a universal goal that can only be achieved through peace and cooperation by viewing the world through the prism of cooperation rather than competition, said Deputy Chairman Saleem Mandviwalla. He opined that MSEAP can be utilized for achieving sustainable peace by addressing the underlying causes of unresolved global conflicts; by tackling extreme poverty and global socio-political and economic disparities; by giving a level-playing field to all in trade and commerce; through responsible exploitation of natural resources; by addressing the spectre of environmental degradation and climate change; and by developing synergies and compatibilities between our national objectives for inclusive development at the global level. He stressed that the pathway to this common goal passes through regional integration; trade liberalization; greater regional and global connectivity; and a mutual appreciation and understanding of all cultures and civilizations.

Senator Saleem Mandviwalla underlined that in order to achieve the goal of sustainable development, it is imperative to resolve long simmering global disputes. “Jammu & Kashmir dispute remains one of the longest lasting situations of foreign occupation, like Palestine, and the longest unresolved issue on the agenda of the United Nations Security Council.” He added that the dispute remains an international flashpoint and the Kashmiris in Indian Occupied Kashmir (IOK) continue to suffer from worst human rights abuses. He urged the international community to take urgent action to help stop the grave human rights violations taking place in IOK, and fulfill its moral responsibility towards the Kashmiri people by helping them realize their inalienable right to self-determination in accordance with the relevant UN Security Council resolutions.

Senator Saleem Mandviwalla said though Pakistan, as a developing economy, faced several challenges, it was determined to achieve economic growth and development in a sustainable manner. He informed that Pakistan had prioritized SDGs which would enable it to join the league of upper middle-class countries by 2030.

With regard to the future of MSEAP, he underscored the need for establishing a permanent secretariat of the forum. He also expressed Pakistan’s strong desire to host future meeting of MSEAP. He also extended an invitation to Asian Parliamentary Assembly (APA) members present at the meeting to attend the forthcoming meeting of APA’s Standing Committee on Political Affairs and Special Committee for Creation of Asian Parliament (SCCAP), to be held at Gwadar City from 29-31 October 2018.