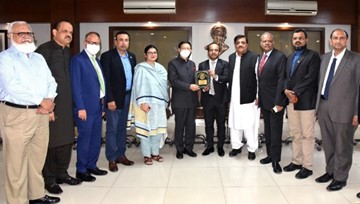 CPEC is an important part of Pak-China friendship, but the relationship between the two countries and with the business community is much deeper than that. Sad to see the situation of Pakistan’s low-income class, but there is an attempt to somehow get Pakistan out of economic difficulties. These views were expressed by Chinese Consul General Li Bijian during a visit to the Korangi Association of Trade and Industry (KATI).

The Chinese Consul General further said that most of the projects of CPEC have been completed, Gwadar has become more important in the region, China has invested in various projects including airport, training center, Gwadar port. He said I am happy that the power crisis of Pakistan has ended due to CPEC. He said that the development work of Gwadar Airport is 90 percent completed and hoped that by 2023, Gwadar Airport will start its operations.

Consul General China Li Bijian said that a hospital is also being constructed in Gwadar and it is expected that the hospital will also start functioning from next year. He said that there are ample trade opportunities in China for Pakistani industrialists and investors. China has a population of 500 million middle class which could be a big market for Pakistan. He said that Pakistan could export fruits and vegetables to China, while China has a large seafood market including rice and fish from which Pakistani exporters could take full advantage. In addition, cooperation between the two countries in the field of IT and electric vehicles could be further enhanced.

The Consul General said that the two countries could work out a strategy to increase Pakistan’s export volume through trade. He urged Pakistani industrialists to take advantage of the free trade agreement between the two countries.

Earlier, KATI President Salman Aslam welcomed the Chinese Consul General to KATI and said that China is a brotherly country of Pakistan and relations between the two countries are very strong. He said that CPEC project is important for the economy of both the countries. President KATI said they would brief Chinese Consulate on his proposals for increasing exports.

Talking on the occasion, former President Danish Khan said that Chinese investors should set up industries in Pakistan. He called for holding joint trade fairs with China to promote Pakistani products.