Skip to content
Home » Pakistan-Afghanistan future belongs with each other: PAJCCI Delegation from Kandahar resolved 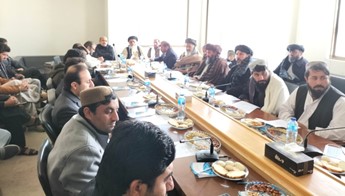 Afghan delegation was led by Haji Abdul Ahad Siddiqui; Board Member Kandahar Chamber of Commerce & Industry & was received by Muhammad Ghani; VP PAJCCI who headed the Pakistan side.

Ghani informed the forum about continuous efforts of PAJCCI and its Chairman, Zubair Motiwala and Co-Chairman, Khan Jan Alokozai; and remarked this congregation as vital. He appreciated PAJCCI’s initiative of conducting these sessions at border crossings to witness on the ground trading activities and issues being faced by business community.

Both sides shared the issues and potential of economic relationship between the two countries. The problems raised included high labour charges, mishandling of cargo while loading and unloading issues on Afghan Side including tax on transit goods, slow clearance rate of empty containers, lack of roads and facilities resulting in delays and damage to the products, restricted hours at Chaman border crossing for clearance and movement, delay & high rejection of visa processing for Afghan businessmen, pendency of 47000 TI forms by Afghan side since a year despite several reminders and communication.

The documentation issue & high valuation was raised on which Pakistan Customs and Kabul counterpart are in discussion. It requires to amend rules on Afghan side. Keeping the intensity of issue, PAJCCI organized a meeting with Customs authorities where Zubair Motiwala advised measures to resolve the issue. Due to this issue at least 500 trucks changed route to Bandar Abbas for transit cargo which is alarming and loss of revenue for both governments.

Afghan side informed that roads & other facilities on Afghan side are almost complete and facilities will be available in next few weeks. Businessmen on Pakistan side have already built roads & expanded gate privately last year. Participants also recommended to start air service between Quetta & Kandahar on similar pattern of Peshawar-Kabul.

PAJCCI has several times raised the matter to increase the operational timings till 10 pm at Chaman border which is yet to be implemented by both sides. Pakistan Customs informed that they are ready however Afghan side needs to ensure the same on their side.

NLC was requested to ensure availability of temporary sheds till completion of ITTMS for safety of goods.

Another high impact issue is slow clearance of empty containers from Afghan side causing detention charges and delays, only 30-40 empty containers are cleared daily which is very low quantity as compared to trading volume.  Afghan authorities are now also reducing availability of trucks to transport to CIS and charges high amount vs quantum of container. Afghanistan is yet to resolve the ban of Iron Scrap import from Afghanistan, the issue has been raised several times with Afghan government.

Forum recommended formation of Joint Border Committee on same lines as one exists at Torkham for swift resolution of operational issues on the spot. Use of TIR to increase routes and trade was also highlighted for uptake by authorities of both sides.

Afghan delegation greatly appreciated the invitation and arranging the stakeholders meeting, giving the opportunity to discuss bilateral trade between the two neighbours. They will also arrange the meeting in Kandahar with Pakistani Delegation to discuss issues directly with Afghan business community and authorities.

Shah Faisal apprised the forum that Pakstan can open all 3 border crossings for trade with Afghanistan however Afghan side needs to ensure facilities and resources. Pakistan wants to import LPG from Turkmenistan via Afghanistan which needs Afghan facilitation. Due to international sanctions State Bank is cautious in regards to third party payments.

Coal imports from Afghanistan reached peak in October 2022 however due to increased duty by Afghanistan it has reduced, it was recommended to be revised for continued coal trade.

Participants also visited border crossing and observed the operations including movement of cargo, clearance and checks.

Delegates appreciated the efforts of PAJCCI in resolving the issues by involving stakeholders at multiple levels. The event was organized and facilitated by The Catalyst; event partner of PAJCCI.

Posted in Import and Export News.