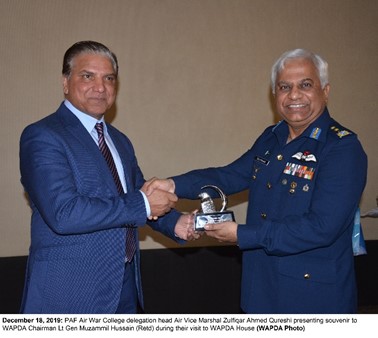 A delegation of the PAF Air War College, Karachi, headed by Air Vice Marshal Zulfiqar Ahmed Qureshi today visited WAPDA House Lahore. During the visit, the delegation was briefed about the water scenario, development plans and future challenges in water and hydropower sectors.

Dilating upon the factors behind the dismal scenario of water sector, WAPDA Chairman Lt Gen Muzammil Hussain (Retd) briefed the delegation that per capita water availability in the country has come down from 5650 cubic meter in 1951 to an alarming level of 908 cubic meter per annum, pushing us to the stage of water-scarce country.

Pakistan can store only 10 percent of its annual river flows against the world average of 40 percent. Ironically, instead of increasing water storage capacity, Pakistan has lost about one-fourth storage of the dams. The live water storage capacity that used to be 16.26 million acre feet (MAF) in 1976 has reduced to 13.68 MAF, which equals to only 30 days carry over capacity. India has carry over capacity of 170 days, Egypt 700 days and America 900 days. The carry over water storage capacity has to be increased from 30 days to 120 days. Likewise, the ratio of low-cost hydel electricity also requires to be drastically improved. The situation can be improved by putting a robust development mechanism in place, said the Chairman.

Elaborating the strategy for harnessing water and hydropower resources, the Chairman said that WAPDA is committed to adding five MAF to water storage and 4600 MW hydropower generation by 2025 and another eight MAF water storage and 16000 MW power generation upto 2030 by completing various projects. Prompt decision making by the all concerned and availability of adequate funds are key to implementing these projects, he added.

The Chairman said that Mohmand Dam, commenced in May 2019, is progressing in accordance with the schedule, while construction on Diamer Basha Dam will also start very soon. Both dams will have a cumulative gross water storage capacity of 9.3 MAF and power generation capacity of 5300 MW, he further said.

The delegation was also briefed about impact of climate change on water resources, water management challenges, water conservation and hydropower potential of the country.