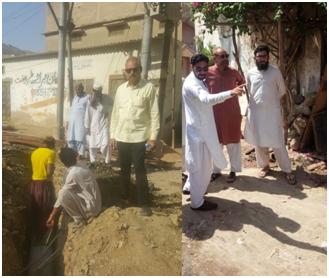 Social activist and worker Tahir Shah lauded the efforts of Chairman UC-19 Block R and S, Shoaib Husain Siddiqui, popularly known as Sony Bhai for taking personal interest in making the environment of the North Nazimabad clean and healthy. Tahir Shah in a statement said that despite repeated reminders to KWASB no action was taken either to drain out the sewage water or to remove the old and rusted pipelines with new ones. This was creating quite a problem for the residents of the area, especially those who come to the mosque for prayers.

Tahir Shah said that Sony Bhai not only made a concerted effort to make the area clean and healthy, besides, he himself supervised the laying of the pipelines in the area.