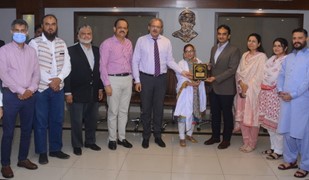 District Korangi Administrator Sajida Qazi has said that no DMC official will harass industrialists for tree planting, establishment of green belt and parking in my tenure. Will co-operate with the Korangi Association of Trade and Industry (KATI) for tree planting on main Korangi Road, while also providing staff for the recently set up fire station bt KATI. She expressed these views while addressing a luncheon hosted by KATI in her honor.

Korangi Administrator Sajida Qazi said that development work has been started on the road between Brooks Chowrangi and Korangi Crossing, trying to solve problems with limited resources. She said that we will participate in the proposals received from KATI for Korangi development projects. She said that the main roads of Korangi come under the supervision of KMC but the internal roads are the responsibility of DMC. She assured KATI that during her tenure, Korangi industrialists would not receive unnecessary notices from the DMC.

Earlier, KATI President Saleem-uz-Zaman welcomed Administrator Korangi Sajida Qazi to KATI and said that KATI members took responsibility for the beautification of various roads and roundabouts of Korangi 20 years ago and for a long time took care of them, spend huge amount of money to maintain said roads and roundabouts but suddenly they receive notices from DMC of land utilization notice which has discouraged the industrialists.

President KATI said that with the cooperation of the government, KATI got fire tenders, set up a fire station in KATI to deal with emergencies and accidents in a timely manner but there is no trained staff to deal with such emergencies in time.

He said that KMC and DMC has failed to end encroachment in Korangi. He said that how industrialists had faith in confidence on government then their services and huge invested money on roads and roundabouts is not protected. Zubair Chhaya said that if DMC contacts KATI for assistance in taking action in case of any encroachment or illegal act against any industrial unit, KATI will set forward and facilitate DMC, at the end of the ceremony, Senior Vice President Zaki Sharif thanked Administrator Sajida Qazi for her visit to KATI.