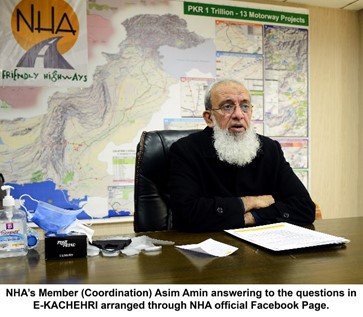 As per directive of Prime Minister of Pakistan Mr. Imran Khan on reaching out to the public through holding Khuli Kachehris by organizations under the Federal Government, National Highway Authority Member Coordination Mr. Asim Amin held E-Kachehri at headoffice of the Authority through NHA official Facebook Page and answered to the questions placed by the people all over the country.

In his opening remarks, Mr. Asim Amin (Member Coordination) said, provision of safe and sound journey on Motorways and Highways stands among NHA’s priorities. In the ongoing season there is severe fog on Motorways M-1, M-2, Lahore-Multan-Sukkur and National Highways and this situation is creating difficulties to the travelers. He asked the people to avoid overtaking and travel at low speed. He further requested to maintain increased distance among the vehicles on road. He said, as per directive of the Prime Minister Office, complaints regarding overcharging and provision of sub-standard items at motorway service/rest areas are being attended promptly. To this effect, he appealed to the travelers to obtain receipt of shopping and compare the rates shown on receipt with the rates declared by the local administration also displayed there. In case of overcharging complaints may be lodged at the phone numbers provided there.

Mr. Asim Amin hoped that Sukkur-Hyderabad Motorway (M-6) project would be started by March 2021 on Public Private Partnership basis. He informed that work on 4 lane Peshawar-Torkham Highway would also start by 2021 on new alignment. Likewise, contract for direly required flyover near Bara Kahu, will be awarded in July 2021. He further said, steps are underway to improve condition of Balkasar-Mianwali road at cost of Rs. 70 Crore.

Mr. Asim Amin further said, dualisation of Indus Highway is also underway in three phases with the cooperation of Asian Development Bank and it provides a reduced distance by 450 Km as compared to Karachi-Lahore-Peshawar National Highway (N-5).

Mr. Asim Amin said, 2-lane Karachi-Quetta-Chaman road will also be dualised. He also informed about proposed flyover at Shahdara near Lahore to control traffic congestion there. He expected that this flyover would be tendered by November 2021. He said, Lahore-Sialkot Motorway will further be extended to Kharain and Rawalpindi. Sialkot-Kharian (70KM) and Kharian-Rawalpindi (115 KM) projects will pave the way for further industrial development in this whole region.

Giving answers to the questions, Mr. Mr. Asim Amin (Member Coordination) said, Layya-Taunsa Bridge and approach road project will be completed by 2022. Work on improvement of Chakdara-Dir segment of N-45 will be started soon. He said, numbers of lanes are being increased at Pindi Bhattian Toll Plaza to control traffic. He said, NHA is also working on Electronic Toll System on national level for ease of the travelers. He said, billions of rupees are spent on construction of roads and that overloading severely damages our roads and it can be checked through mutual cooperation among stakeholders. He asked NHA officials posted near Sakrand at G.T Road to check the reflectors to facilitate the traffic there.