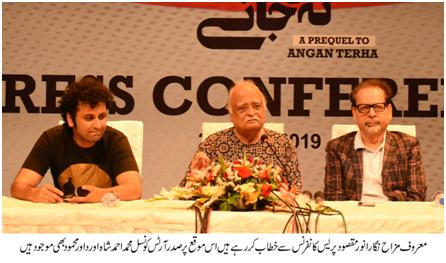 “Naya Pakistan”; a new play will be presented in Arts Council on 14th August this year”, this was stated by famous writer Anwar Maqsood in a press conference held in Arts Council. He further added, “I am amazed on myself for writing a second play too soon. I take long breaks between writing screenplays”. “Naya Pakistan’s” central idea is based on a barrow-man who is selling “Old Pakistan” on it. This play is also in sequence to the artist endowment fund.

Anwar Maqsood said that I am working in the industry for the past 57 years; all the money collected from “Naya Pakistan” will also be given to the artists who are old and are not getting work anymore.

He told the media persons that upcoming shows of 2 weeks are booked already for “Nach na Janay”. After Ramadan it will be presented in Faislabad, Lahore, Multan and Peshawar as well.

Addressing to the press conference President Arts Council Muhammad Ahmed Shah thanked Anwar Maqsood for writing tremendous plays for Arts Council. Shah said I am thankful to corporate and public sector for their positive response on “Nach Na Janay”, we are doing this for artists from the past who gave their life to the industry. Director Dawar Mahmood said that international bookings for “Naach Na Janay” are open now. It will be premiered in London, Dubai and Malaysia next year. At the end of the press conference, a “director’s cut” of “Nach Na Janay” was presented to the attendees. “Nach Na Janay” is a prequel to “Angan Terha” a famous play of 80’s. Cast includes Yasir Hussain as Akbar, Abdullah Farhat as Mahboob Sahab, Sara Bhatti as Begum Jehan ara and Asad Gujjar as Chaudhry Sahab.