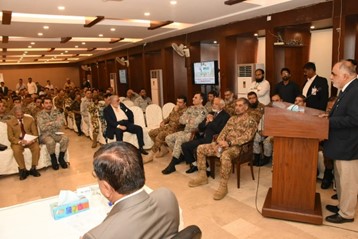 A team of 250 officers of National Defense University (NDU) visited the Federation of Pakistan Chambers of Commerce and Industry (FPCCI) for an orientation tour and interactive session with the businessmen and to get the knowledge of activities of FPCCI and its role in the economic development of Pakistan particularly in the promotion of trade, industry and investment.

While welcoming the officers, the President of the Federation of Pakistan Chambers of Commerce and Industry (FPCCI) Engr. Daroo Khan Achakzai briefed about the function and activities of the FPCCI for the promotion of trade, industry, investment, business opportunities for industry through a range of specialized services at national and international levels. He also apprised the team that FPCCI plays the role of a liaison body between the Government and the private sector, and works on encouraging new industries, pursuing Pakistan’s interests with trading partners and giving proposals on trade and industry to the Government. He also informed the delegates about the trade and investment opportunities available in context of China Pakistan Economic Corridor (CPEC) that will create linkage of South Asia with Central Asian. He also informed about the forthcoming international events; Executive Committee Meeting of ECO-CCI and Board of Directors meeting of Islamic Chamber of Commerce, Industry and Agriculture scheduled from November 13 to November 17, 2019 at Karachi which will be attended by OIC members country. While talking to officers, he appreciated the role of Armed Force in improving law and order situation and creating peace in Pakistan.