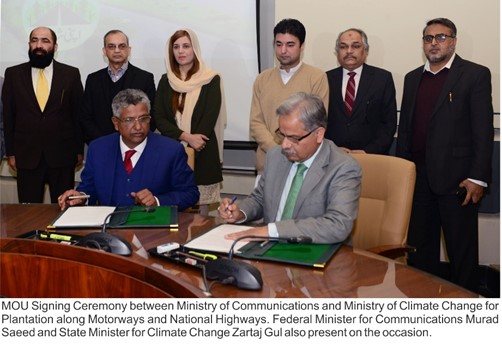 Minster for Communications & Postal Services Mr. Murad Saeed has said that promise of elimination of corruption shall be fulfilled. Under clean and Green Pakistan programe, pragmatic steps are being taken for plantation along national highways and motorways. He was addressing signing ceremony of Memorandum of Understanding (MoU) between Ministry of Communications and Ministry of Climate Change for implementation of Project titled “Apni Shahrah” to establish plantation in the Right of Way of Motorways and National Highways, in the country.

Addressing the ceremony, Mr. Murad Saeed said, as per vision of Prime Minister of Pakistan Mr. Imran Khan, Ten billion trees will be planted under Clean and Green Pakistan campaign and that signing of MOU between Ministry of Communications & Ministry of Climate Change is a step forward to this direction, under which plantation will be done along motorways and national highways throughout the country. Besides completing ongoing schemes he desired to undertake new road building projects on BOT basis. Improved health and education facilities and provision of clean drinking water, promotion of tourism and building of farm to market roads stand among priorities of the Government, he added.

Ms. Zartaj Gul in her address said, Ministry of Climate Change has initiated “Apni Shahrah” project with cooperation of Ministry of Communications that will be realized with the cooperation of business community, Civil society and NGO’s to make country clean & green. Under this project Right of Way of national highways and motorways will be utilized for plantation. She said, planting trees is “Sadqa-i-Jarya” and that trees provide protection against floods, heat wave and disasters. This afforestation move will also enhance national revenue, she said.