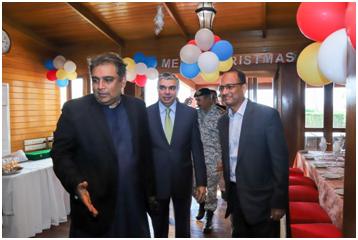 Minister for Maritime Affairs Ali Haider Zaidi met Chairman All Pakistan Shipping Association Mr. Aasim Siddiqui to discuss shipping industry problems and steer it for the progress. The event held recently in a local club which was also attended by Chairman KPT Rear Admiral Jamil Akhtar and other top officials.

Chairman APSA Mr. Aasim Siddiqui along with all the significant stakeholders of shipping fraternity welcomed the guests and discussed the issues, challenges and way forward.

Some of the key points that were discussed with minister during the meeting were:

1. False propaganda by importer and media against shipping fraternity:

The Minister was aware of the situation and he has also discussed same with Prime Minister and Finance Minister Mr. Asad Umer.

Trains track to be made operational for the terminal to load the containers from the container terminal. Maximum facilitation to the trade to use the railway for their consignment will be provided. Access of trains to PICT, PIBT, SAPT and KICT was also discussed.

3. Revision and Modification of Shipping Related Policy and Legislation:

The Minister was apprised regarding the prolong pending legislation on Carriage of goods by Sea Act – 2017 and Sea Carriage Shipping Documents Act 2017 (COGSA). As finalization of these two acts will resolve the number of shipping industry’s issues. Beside this minister was also briefed on revision of Merchant Marine Policy 2001, with the emphasis on making it more beneficial for both private investors and Pakistan. Draft bills on COGSA and working paper on Merchant Marine Policy prepared by Manzil Pakistan was handed over to Minister on the occasion, which was appreciated.

The Minister and Chairman KPT assured the entire fraternity that they would always be there for the betterment of the industry and will use all of their resources towards the development of the sector and serve the country.