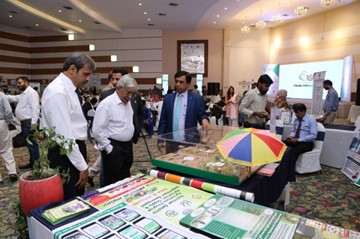 NSP (Nutrition Support Program) recently held an inter-provincial progress review workshop at a local hotel. The workshop provided a unique opportunity to nutrition champions and implementers to exchange best practices, success stories, bottle necks, lessons learned and create a way forward to further strengthen the implementation of nutrition intervention across Pakistan. The chief guest at the workshop was Azra Palijo.

Dr. Waqar Memon (Program Director, NSP) in his opening remarks mentioned that NSP aims to reduce the prevalence of acute malnutrition among children aged between 6 to 59 months and anemia in women of reproductive age along with improving the Infant Young Child Feeding (IYCF) practices in children of up to two years old. To achieve these goals he pointed out that this would be achieved by building community awareness and facility-based interventions coupled with a mass media behavior change communication in local and national languages through short documentaries, dramas, TV commercials and many other creative means.

He further proposed the establishment of a one-unit solution for implementation of nutrition services throughout the province, inclusion of OTPs in regular cost centres and expanding the network of frontline workers for outreach activities as a way forward message that may have policy implications.

Special secretary Dr. Asghar Memon highlighted multi-sector action for preventing Malnutrition followed by Dr. Amir Ali Samnani who communicated that the Nutrition Support Program in relation with Zeekay Films has developed a cinematic movie ‘TALAASH JAHRI HAI’ which is going to be launched in the near future, which has covered multiple issues and bottlenecks to combat malnutrition issues in Pakistan. He further added the importance of media in effectively tackling the challenge of malnutrition and urged media to play their role in fighting against malnutrition. The media can be a vital force in influencing the behaviors of communities. He further mentioned that soon the contribution of Sindh for Pakistan will not only occupy Pakistani cinema but will be released internationally.

It must be noted that the project is being implemented through Provincial Nutrition Cell, Department of Health, Government of Sindh with the following implementing partners PPHI, LHWs, MNCH and NGOs in LHW un-covered areas in the community.