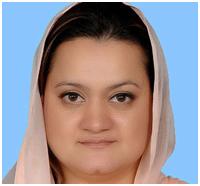 The oath-taking ceremony was conducted entirely in Urdu language.


Aurangzeb was elected on a reserved seat for women in the 2013 general elections. She is also the parliamentary secretary for interior. Her mother, Tahira Aurangzeb, too is an MNA. Aurangzeb holds an MSc degree in environment and development from Kings College London and a Masters degree in Economics from Pakistan.