Executive Director of “The Financial Daily International”, and Secretary General of Karachi Editor’s Club, Manzar Naqvi has said that one percent population living in 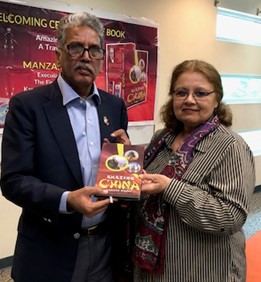 China is Muslim, and no discriminatory attitude is adopted not only against Muslims but against any section of the society. He said the Chinese government is contributing to the protection of Muslims and is investing in the development of Muslim areas.

This was disclosed by him in response to a question about Muslims’ situation in China on the occasion of his launching ceremony of his book “Amazing China” held in Washington, the other day. He said that as far as the question ofoppressive attitude against Muslims is concerned, this is a propaganda launched by western and anti-China forces.

Talking about his book, he said that it is his second travelogue on China, whereas he has also written a travelogue on his visit to Turkey. He said, he saw big museums and gardens in every city of China where heritage belonging to seventh century and even before that exist, and the Chinese nation isplaying an important role to see these antiques and look into their contemporary past.

Manzar Naqvi narrator further said that after many visits to China, he realized that why Holy Prophet (SAAW) had asked Muslims to go to China to acquire knowledge, because China at that time was the centre of knowledge and wisdom while most of the world countries were still deprived of knowledge.

In response to a question, he said that there is no other opinion except that China is investing massively in Pakistan but interest rates are very high. But, he added, it is beneficial to restore economic heading in the country; they believe that friendship and relationships are based on the interests of their country. He said, definitely we are friends of China but we should also keep our interests in mind like China is protecting its own interests.

In response to another question, he quoted Turkey as saying that per capita income in Turkey has been increased from 3,000 to 12,000 and the main reason for which is that they have divided their country into smaller administrative provinces. He further said that Turkey’s Minister for Development has advised us to distribute the country into small administrative units because labour, investment and public interest in the small administrative unit increases. However, whenever there is talk about a fifth province in the country, a hullabaloo is created.