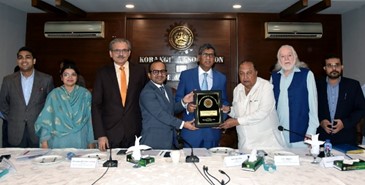 Chairman KPT Tariq Huda further said that I am trying to reduce the demurrage charges, but due to unavoidable reasons, this issue is delayed; in a few days, I will invite all the business community to the KPT head office, where it will be formally announced. He said that due to the recent change in the import policy, all the containers were stopped at the port, which have now been allowed to leave, due to which the demurrage charges were incurred. Tariq Huda said that since 2002 no charges had been increased by KPT. However, employee salaries and other administrative expenses increased. This is the reason why now the operating profit and revenue are equal, in the past KPT’s profit was high, many development projects were completed by KPT’s expenses, including KPT flyover, underpass and other projects. However, due to a lack of budget, it is difficult to bear the expenses of development projects. Now is the time to take concrete steps to increase the income of KPT. Chairman KPT said that we will start Pakistan’s single window operation which will provide facilities to importers and exporters. Tariq Huda said that we should use our marine resources. In this regard, if the business community under the leadership of SM Muneer presents its suggestions, I will provide all possible support. He said that if the Pipri railway track is completed, 100 containers can be cleared from the port immediately. Apart from this, the elimination of marine pollution also becomes our responsibility to take all possible measures. We are throwing 8000 tons of garbage in the sea every day which has increased the pollution. We must immediately step up efforts to boost infrastructure and commercial activities. KPT will soon launch an awareness campaign to prevent environmental pollution.

On this occasion, KATI Patron-in-Chief SM Muneer said that corruption is spreading rapidly in the country. He said that floods had created havoc in the country at this time, in such a situation, negative campaigns against Pakistan Army on social media are condemnable. SM Muneer said that the Army Chief closely monitors the economy. The country is currently going through an economic crisis; 90% of the industry has closed in Faisalabad; in such a situation, we have to improve the economy. The most corrupt officer in the country is appointed as Water Board Chairman. Despite filling dams across the country, the water board continues to cut off water. Chief Patron KATI said that fisheries have an export value of 450 million rupees, but the road and infrastructure there are in disrepair. I salute Salman Aslam, who took immediate relief measures in connection with KATI’s initiative to help the flood victims.

President Salman Aslam said that KATI was the first organization that took practical steps to help the flood victims. I have taken the first aid consignment of 5 trucks under my leadership, and I will prepare the second consignment soon. He said that KATI also announced 50 lakh rupees to relieve flood victims. President KATI said the local industry is facing difficulties due to the global crisis. Severe inflation has broken the backbone of the common person. The cost of production is threatening to bankrupt enterprises, while port demurrage charges and other payments are adding to the cost of doing business which manufacturers cannot afford.

Senator Abdul Haseeb Khan said that Tariq Huda is an experienced person, and it is hoped that he will solve the problems of the industrialists by taking a personal interest. He said that we import raw materials and export them later; if time is saved, it can be done better. Exporters have been hit hard by the additional costs of demurrage and detention charges.

Zubair Chhaya, CEO of KITE Limited, said that KPT’s performance is continuously improving. The infrastructure we go through is appalling. In contrast, Korangi, SITE, Federal B Area, Landhi, and North Karachi industrial areas are the backbone of the country, but they are being disabled by destroying the infrastructure. There are no corridors to go from the industrial area to the port. KPT should start a ferry service for citizens of Karachi to increase revenue.

Chairman of the Standing Committee Faraz-ur-Rehman said that steps should be taken to improve freight charges, and an independent authority should be formed for KPT on the pattern of the Drug Regulatory Authority to decide the issues of demurrages and detention. He said that operating companies are collecting demurrage charges arbitrarily due to the difficulties of importers and exporters.