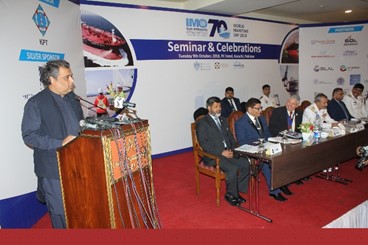 KPT hosted World Maritime Day Conference at a local hotel today. The inaugural session and the technical sessions were chaired by Minister for Maritime Affairs Syed Ali Haider Zaidi which was attended by stakeholders belonging to the maritime sector, more specifically the ports and the shipping sector.

While speaking on the occasion the Chief Guest Minister for Maritime Affairs Syed Ali Haider Zaidi highlighted the importance of unlocking maritime potentials through clean and beautiful coast line which offers lucrative opportunities of tourism and revenue prospects for the nation. He emphasized that Karachi is blessed to have a natural harbour and that it is only a matter of putting things in right direction. He informed that he has already started the beautification and cleaning project of Keamari Boat Basin and very soon results will come to fore. He spoke on the importance of automation in the ports and shipping sector which will ultimately boost the cargo handling and shipping potentials of Pakistan.

Earlier, in the opening remarks the Chairman KPT Rear Admiral Jamil Akhtar said that shipping is making a major contribution to global prosperity in a way that has only a relatively small negative impact on the global environment. He said that more than 80% of global trade such as fuel, food, finished goods, necessities and luxuries are transported through shipping. Indeed, for vast majority of cargoes there is no viable alternative, he added. He further said that World Maritime Day Conference of today is an excellent opportunity for the shipping industry to showcase itself to general public and politicians alike.