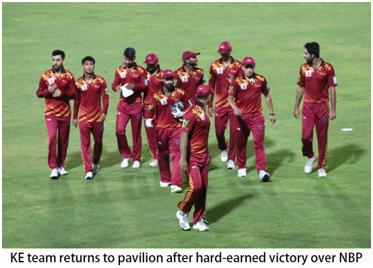 K-Electric (KE) defeated National Bank of Pakistan (NBP) by 51 runs in their second match of the 7th Corporate T20 Cup, held at Moin Khan Academy, Karachi. A score of 56 runs by Ramiz Aziz, who was well supported by Umair Yousuf with 35 runs, enabled KE to set a respectable target of 172 runs. KE bowlers, Muhammad Imran, Agha Salman, and Mohammad Mohsin successfully defended the total by taking three wickets each to bowl out the opposing team.

Man of the Match, Ramiz Aziz said; “It was a very exciting match. As defending champions, we look forward to maintaining our top spot.”

Team Captain, Hasan Khan, who KE has groomed for four years and who has represented Pakistan at the U-19 World Cup and Quetta Gladiators in the Pakistan Super League, said the win showed KE is focused on creating future champions for Pakistan. “We have great spirit in the ranks, and this is thanks to our management who are committed to empowering local youth to develop its talent,” he added.