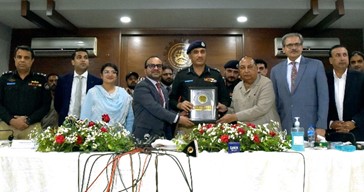 Inspector General of Police (IG) Sindh Ghulam Nabi Memon has said that the law and order situation is improving with the cooperation of the community and the police. There are 46 thousand cameras installed by the community in the city, which has reduced crime. If the cooperation between the two continues, many problems can be solved, we are working to improve the investigation branch, due to weak cases, the accused are released, and the investigation is not very strong, which we focus on improving.

KATI’s employee verification system will help remove many problems. He expressed these views after inaugurating the Employee Verification System in KATI while addressing the traders and industrialists.

After the inauguration of the Employee Verification System (EVS) in KATI IG Sindh Ghulam Nabi Memon said that it is a sad thing to spoil the situation with baseless news on social media, and people should avoid sharing unverified posts on social media. We are also working on this matter through which the citizens can get immediate information on whether the news is false or true. In this regard, media network cells are being created, but the media should also show responsibility. The crime rate decreased. IG Sindh said that Indus, Mehran and National Highways were affected by the flood situation, 1,000 Sindh Policemen were deployed on Mehran and National Highway which helped in traffic flow and security, and many policemen were involved in relief activities. As the head of the police department, I want peace in Karachi so that business can grow.

The Sindh government has given us the autonomy to recruit young people. Recruitment is also taking place from Karachi. 33,000 new recruits are being made and 9,000 youths are undergoing training and their arrival will remove the shortage of personnel. IG Sindh said that there has been no crime in China in the last five years, China has stabilized itself economically, the counter-terrorism department will be improved next year, funds have been increased for the special branch, and the personnel of the police station has been improved and the system of the police station has been improved and it will be more strengthened if the police station is strong, then the crime rate will be reduced, while the investigation branch is being further strengthened. IG Sindh Police said that they keep informing the civil society at different levels, and the establishment of forensic laboratories will be implemented soon.

IG Sindh Ghulam Nabi Memon added that the problem of street crime has been in Karachi for many years, we need to control this problem, the police is working under a vision, the results of which we want to improve the law and order situation of Karachi. He said that he has spoken to the Chief Minister of Sindh to improve the CTD, our proposal has been accepted by the government and the CTD will work in a modern way in the future. We do not just want to condemn crimes but take action. We should all avoid things that fuel the ambitions of the enemy. Earlier, SM Muneer, Patron-in-Chief from KATI, said that Karachi is the economic artery of Pakistan, but due to deteriorating conditions and non-provision of facilities. Due to this, I had to move to Lahore, but I still have a heart connection with Karachi, which is the reason why I spend most of my time in Karachi. KATI’s employee verification system is a unique system of its kind, which allows employees to be verified easily. He said that the disaster of floods in the country has affected a large number of people. He said that under the leadership of KATI President Salman Aslam, 45 trucks have been sent to help the flood victims so far.

The army organization is also active to help the flood victims, but it is sad when some self-interested people are spreading negative propaganda against the Pakistan Army, which we strongly condemn. SM Muneer said that the business community will continue to cooperate with law enforcement agencies to improve the law and order situation. President KATI Salman Aslam said that if law and order are not improved, the business will be affected, and we need to provide security to the business community and business, Korangi Association has started an employee verification system in collaboration with the police, which will yield better results. Paying tribute to the services of the police, he said that the police have made full efforts to improve peace and order by sacrificing their lives. Looking at the growing trend of employee verification software, the aim of which is to establish peace in the Korangi Industrial Area and identify criminal elements in time. He said that there is an urgent need for the Safe City project in Karachi so that crime can be eradicated in the city. He said that the police and Rangers have made immense sacrifices for the peace of the city, for which the business community salutes them.

Syed Farrukh Ali Qandhari, Head of the Employees Verification Committee, said that he is grateful to Sindh Police who developed this software. In this system, complete details of people working in the Korangi Industrial Area will be verified by NADRA and Sindh Police under an automatic system. He said that today is the era of information technology, which need the time to take advantage. Chairman of the Standing Committee Danish Khan said that the economic activities of the country increase due to the increase in economic activities in Karachi, if Karachi is closed, then Pakistan will freeze economically.