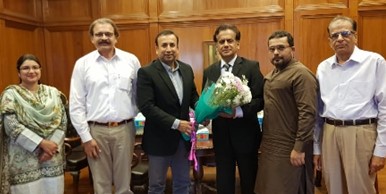 On this occasion Mr. Shalwani told the delegation details regarding administration’s action against encroachments within the city and specially Saddar.

He said that this action brought a sigh of relief to the residents of the area. He also shared that more campaigns such as cleaning drive would be started to make Karachi a city which meets international standards.

President KATI Danish Khan assured the support of association for any measures that would be taken for the prosperity of the city and facilitation of general public. He expressed that under the vision of KATI’s Patron in Chief SM Muneer, the association not just raise voice for the industry and traders, serving the city and country and supporting the administration for the cause is a national duty in the association view. The delegation also presented a flower bouquet to the commissioner Karachi.