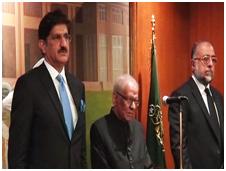 Petron in Chief of Korangi Association of Trade & Industry (KATI) SM Muneer and President KATI Masood Naqi congratulated the J(r) Saeed Uzzman Siddiqui for taking charge as Governor Sindh. In a statement issued by KATI it is said that the governor is has a repute of esteemed member of law fraternity.

“Appointing such a renowned, honest and committed personality for the office of Governor is an appreciated decision of Federal Government” the statement said. It is also stated that SM Muneer, Masood Naqi and other office bearers of KATI welcome the new Governor and hope that he will play a vital role for development of the province and especially will prove a bridge between the government and the business community.