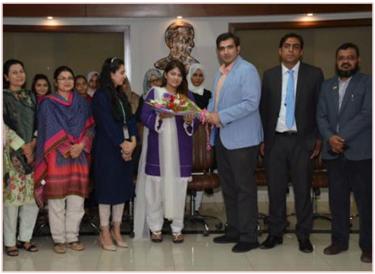 President of Korangi Association of Trade & Industry (KATI) Sheikh UmerRehan has urged to provide lending and consultancy facilities to women entrepreneurs to enhance their role in SMEs Sector. He was speaking to a gathering on the visit of HBL Nisa delegation to KATI. Vice President KATI Syed Wajid Hussain, Head of KATI’s standing committee on women empowerment Maheen Salman and a large number of women entrepreneurs also attended that gathering.

Sheikh UmerRehan cited that this during the visit of President& CEO HBL Muhammad Aurangzaib to KATI last month , it was deliberated that HBL and KATI should do some collaborative efforts for women entrepreneurship as this is one of the basic step towards economic stability of the country. He appreciated the products offered by HBL to women entrepreneurs. He also applauded the role played by SCB to provide clear direction for lending and consulting facilities for enhanced role of women in economic activities and their financial inclusion. He said that there is a lot of unexplored economic venues where women can play their role for the prosperity of their household and the country at same time. Maheen Salman said that women are half of country’s population “Our financial and economic inclusion is need of economic development of country , not a mere option now” she added.

The delegation of HBL experts told that the bank will provide loans up to 15 lakh, for five years on lowest interest rate of 5pc to women entrepreneurs and consultation would be offered without any charges. It was also told that HBL would bring women specified insurance products in which breast cancer treatment would also be included with other benefits. HBL Nisa experts also briefed women entrepreneurs about services offered by the bank and process of financing for their startups and ventures.