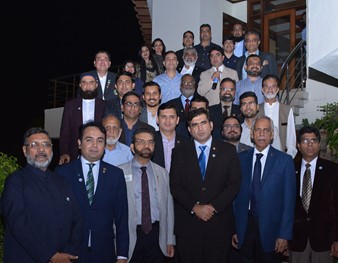 Leadership of Korangi Association of Trade & Industry (KATI) lauded the efforts of PM Khan for the implementation of China Pakistan Free Trade Agreement (CPFTA-II) from 1st of December this year and landed hope that it would significantly increase the country’s export. In a joint statement of President KATI Sheikh Umer Rehan, Senior Vice President Muhammad Ikram Rajput and vice President Syed Wajid Hussain were of view that this would be a great opportunity to expend our exports volume and a step forward to a balanced bilateral trade relation with China.

President KATI Sheikh Umer Rehan noted that in October this Year PM Khan during his visit to China had made tremendous efforts for the trade agreement which shows that expending exports were on the top of his priorities. He said that there always been a great potential we just need a right direction and appropriate opportunities. He said that after execution of this agreement not only the exports would expend we hope it would be proved a great leap in technology transfer, industrialization, employment opportunities and trade balance of the country. He underscored the need to provide support to SMEs sector for expansion of exports and sustainable economic growth.

He mentioned that there are plenty of unexplored opportunities in agriculture, fruits and food sector to develop SMEs and commercial activities “these sector could also play a huge role for increase in export” he added. He also suggested that for more exports we need more ease of doing business and much lesser cost of doing business as compare to the current situations. Sheikh Umer Rehan said that government has already taken some positive steps to provide ease of doing business but there is a lot to be done yet.