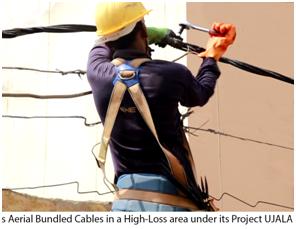 K-Electric, under its flagship project Ujala, is continuously investing in improving its distribution network across the city. This is being done by converting the cables on loss-incurring PMTs to Aerial Bundled Cables (ABC) to improve the power supply to consumers residing in these areas. Spokesperson KE added that only last week, under Project Ujala, the utility converted 165 PMTs on Aerial Bundled Cables. These conversions were carried out in areas of Shah Faisal, Johar, Orangi, Lyari, Liaquatabad, Garden, Bahadurabad& FB Area.The total number of PMTs that have been converted to ABC under Project Ujala till now, stands at over 702, impacting lives of almost 150,000 people positively.

KE engages with the community by providing camps so as to educate residents on the benefits of using ABC over illegal hook connections. Consumers are also provided a ‘One-Stop Shop’ where they can avail new and subsidized connections on the spot. Usage and abundance of illegal hook connections is the single largest reason for faults and tripping. Usage of ABC curbs theft by preventing usage of illegal hooks thereby ensuring a more reliable power supply for residents. The utility has so far transformed different communities through the installation of ABC, new transformers and low-cost connections. Many Communities in Lines Area, Liaquatabad, Ghazdarabad, RehmatChowk, Altaf Town and Keamari, which were previously infested with illegal connections and fault ratio was quite high, are now power theft-free with a minimal fault ratio.

K-Electric launched its flagship community development project ‘Ujala’ earlier this year, with an estimated investment of PKR 5 billion to empower the lives of over 1 million people residing in 200 communities across its network. The utility has pledged to help improve the reliability of power of these communities while boosting socioeconomic activities through sustainable development initiatives.