A meeting was held between KA 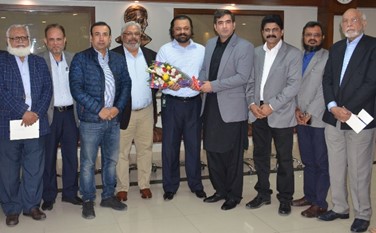 TI members and K Electric officials at Korangi Association of Trade & Industry (KATI) to address the issues and problems being faced by industries with KE. During the meeting KATI members complaint the frequent interruption of electricity at Korangi Industrial area, and emphasized the urgent up-gradation and revamping the infrastructure for smooth operation of KE.

Asmar Naeem, Director External Affairs KE while addressing the meeting said that over PKR 50 billion in outstanding dues have been pending payment, out of which almost PKR 33 billion is owed by the Karachi Water & Sewerage Board alone. This is directly impacting the cash flow of the company and making it difficult for KE to sustain its operations. The company has had to increase its dependency on banks and financial institutions to bridge the growing deficit.

Sheikh Umer Rehan, President KATI while appreciating the working of KE urged the Government and related agencies to release payment for outstanding dues of over PKR 50 billion to K-Electric as it imperative for smooth operation of KE.

Sheikh Umer Rehan commented “Karachi city and its industries are growing at a consistent rate and require constant investment to match the demand. Industrial consumers are also planning their productions and require a guarantee of stable power supply. It is impossible to produce quality goods and sell them in the market if the power supply is interrupted.”

Chairman KE Standing Committee KATI, Danish Khan also added “The Provincial Government should take up this matter in the interest of Karachi and its citizens. Karachi is totally dependent on KE’s performance, and we cannot afford any major disruption to life in the city.”

KATI officials appealed to the Chief Minister and relevant Sindh Government authorities to meet with KE and find an expedient solution so that a potential long-term crisis could be avoided for Karachi.