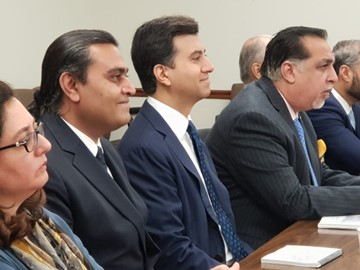 JS Global Capital Limited (JSGCL), Pakistan’s leading equity brokerage and investment banking firm is proud to announce that it has once again taken the lead and successfully hosted the fourth edition of its annual event, titled “Pakistan Investment Conference – 2019” (PIC 2019) during 4-6 September, 2019 in the US.

This mega event, held annually, is designed with the aim to attract foreign direct and portfolio investment to Pakistan and present a true image of the country to the international community. Further, through policy level engagement, the business delegation aimed to lobby for better access and improvement in economic ties.

The Honourable Governor Sindh mentioned the paradigm shift in Pakistan in terms of increased documentation in the economy and structural reforms being implemented. He also brought to the attention of the audience the humanitarian crisis and atrocities being committed by India in Indian Occupied Kashmir and urged the international community to take strong action. Ambassador Ali Jehangir Siddiqui spoke at length over how Pakistan is and has improved in terms of positioning itself to become an attractive investment destination and cited various measures that are reflective of Governments resolve to make Pakistan a rising star in the region. Ambassador Siddiqui also highlighted the policy level changes that have been brought by the Government to improve the overall business climate in Pakistan. Mr. Kamran Nasir highlighted the various sectors offering high potential for increase in trade and investment in the near future between both countries. At the Pakistan Embassy, the Ambassador, H.E. Dr Asad Majeed Khan stressed the improving relations between Pakistan and the US.

The Honourable Governor Sindh expressed his gratitude and highlighted the seriousness of Pakistan’s efforts in improving economic relations with US. He also emphasized Prime Minister Imran Khan’s vision for the country and how seriously Pakistan is now progressing towards becoming a stronger economy. The delegation was next hosted by Michael Kugelman, Deputy Director of the Asia Program and Senior Associate for South Asia at the Woodrow Wilson Center. During the discussions, Mr Ali Jahangir Siddiqui highlighted the opportunities available for US companies under the CPEC program and also mentioned the efforts being made in improving Pakistan’s position in terms of Ease of Doing Business. Mr Ehsan Malik elaborated on Pakistan’s facilitation of SEZs and discussed how MNCs have been successfully operating in Pakistan. Mr Khalid Mansoor spoke eloquently on how Pakistan has overcome its energy shortfall. During these discussions, the Governor Sindh underlined Pakistan’s relations with its neighbouring countries and emphasized that the global community should take serious note of the human rights violation in Indian Occupied Kashmir.

On the second day, the delegation was hosted by Esperanza Gomez Jelalian, Executive Director Asia at the US Chamber of Commerce and President of the US-Pakistan Business Council. She shared with the audience that efforts are in process to encourage the US business community to benefit from investing in Pakistan. The Governor Sindh mentioned how the improvement in law and order situation, rising incomes and urbanization makes Pakistan attractive for FMCG companies in particular. Mr. Kamran Nasir also invited the US Pak Business Council to bring a delegation of investors from the US SME sector to Pakistan. The need to convert such meetings into action was emphasized by working together on specific opportunities in the near future. The meeting with USAID was hosted by USAID Office of Afghanistan and Pakistan Affairs (OAPA) Deputy Assistant Administrator (DAA) Kevin Brownawell, who elaborated on USAID assistance to Pakistan. USAID E3 DAA Karl Fickenscher explained USAID’s private sector engagement strategy for Pakistan.

The Pakistani delegation members invited USAID to deploy its expertise in areas where it had successfully done so in other countries. Moreover, perennial issues in Pakistan such as water shortage and waste management were highlighted. The growing market for digitization was also underlined as a prime area for investment. On the third and final day, the delegation travelled to New York, where JSGCL along with its US partner – and one of the leading global institutional brokerage and advisory firms – Rosenblatt Securities Inc., arranged exclusive meetings between senior management of Pakistani corporations and large global fund managers. The delegation included Presidents/CEOs and CFOs of Pakistan’s top notch companies including Habib Bank Ltd (HBL), Engro Corporation (ENGRO), Hub Power Company (HUBC), United Bank Limited (UBL), MCB Bank Limited (MCB), Oil and Gas Development Company Ltd (OGDC), Pakistan Petroleum Ltd (PPL), Pakistan State Oil Company Ltd (PSO), DG Khan Cement (DGKC), The Searle Company Ltd (SEARLE), AGP Limited (AGP). Whereas among unlisted companies was Airlink Corporation. As always, JSGCL is proud and humbled to be a part of such initiatives that seek to improve Pakistan’s image in the international community and benefit the country economically. JSGCL would also like to thank all the local and foreign participants and partners who played a massive role in making this event a huge success. Pakistan Zindabad!.