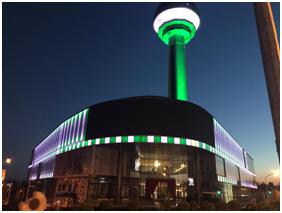 To commemorate the National Day of Pakistan on 23rd March 2019, the bridges in Istanbul across Bosporus Strait, connecting the two continents of Asia and Europe, would be illuminated in Pakistan Flag colors.

Similarly, Ankara’s most distinct landmark – Atakule, situated at the head of the famous Jinnah Road is being light up in the colours of Pakistan’s flag from 21-23 March. The Atakule AVM will also host a photography exhibition “Colours of Pakistan” from 23-24 March depicting Pakistan’s landscapes and culture.

The Embassy of Pakistan deeply appreciates these gestures of the Turkish Government and Atakule AVM to commemorate the National Day of Pakistan.