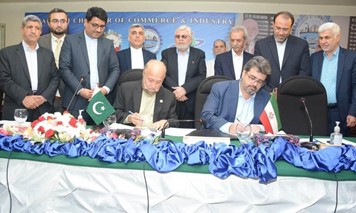 The Karachi Chamber of Commerce & Industry (KCCI) and Isfahan Chamber of Commerce, Industries, Mines and Agriculture (ICCIMA) signed a Memorandum of Understanding (MoU) to establish a practical framework for the development of business relations between the two Chambers and to set forth the procedures of cooperation which could enhance implementation of mutual economic objectives.

Speaking on the occasion, Delegation Leader Ghulam-Hosein Shafeie, while expressing optimism about achieving $5 billion trade target, said that they intend to implement a new economic plan and make the most of the friendly relations between the economic and private sectors of the two countries to advance cooperation based on the devised plans.

Referring to Zubair Motiwala’s remarks, he said that Iran was one of the major suppliers of energy in the world and the country was ready to meet Pakistan’s growing needs in the energy sector. He was of the opinion that formation of Iran-Pakistan joint business council would certainly result in expanding economic relation between the two countries and invited business communities of both countries to become members of this important council in order to exchange information and opinions.

While appreciating KCCI for arranging B2B meetings with Iranian Delegation, he said that Karachi was the economic hub Pakistan which was of utmost importance to the business community of Iran. “We have to work collectively to ensure economic prosperity and steps have to be taken improve linkages between the business communities of the two brotherly countries.”

Consul General of Iran Hassan Nourian informed that four parliamentarians and three Presidents of Chambers of Commerce from Iran were also part of Iranian delegation who were here to explore trade and investment ties with their Pakistani counterparts. “Iran will be holding a single country exhibition here at Karachi Expo Center on January 14, 2023 to promote bilateral trade and bring business communities closer to each other”, he added.

Speaking on the occasion, Chairman BMG Zubair Motiwala appealed the United States to announce some kind of a special relaxation in the economic sanction imposed on Iran on humanitarian grounds as Pakistan faces severe gas crises which would result either in complete closure or limited production activities at the industries in Karachi and cause massive layoffs, followed by rising poverty. “Hence, Iran, which has sufficient gas available, must be allowed to supply gas to the energy-starved Pakistan which can be made available to industries within the shortest possible time either through bousers or any other feasible arrangement which would not only save our economy from plunging into further crises but also ensure bread and butter to the poor masses”, he added.

He said that Iran, with a strong GDP of $463 billion and impressive exports of $116 billion despite so many challenges due to economic sanctions, has been progressing well but it would have been at least 20 years ahead from where it was today. “We always support Iran which is not only our neighbor but a brotherly country as well. Pakistan is a big market for Iran and so is Iran for Pakistan but the business communities are unable to reap the benefits because of sanctions on Iran”, he added and highly acknowledged Iran for being the first country to recognize Pakistan after its independence 75 years ago.

He was of the view that the formation of Pakistan-Iran Joint Business Council was a good step which would pave way for the two countries to move forward towards achieving the trade volume of US$5 billion.

“To achieve the desired results, there is a need to expand the basket of barter trade while the joint border markets must also be improved”, Zubair Motiwala said and advised to form a six-member committee between KCCI and ICCIMA with equal representation to explore new avenues of cooperation and opportunities for promoting bilateral trade.

President KCCI Tariq Yousuf, while warmly welcoming the Iranian delegates, said that both countries were unable to extend bilateral trade due to trade sanctions on Iran and hoped that this visit of Iranian businessmen would help increase trade between the two countries.

He was of the opinion that bilateral trade volume, which was supposed to increase at a considerable pace, has been declining which needs to be examined. He suggested that the barter trade between the two countries must not remain confined to trading fruits and vegetables only, it has to be expanded to achieve the common objective of improved bilateral trade. “Hence, both the government must look into the possibility of increasing the number of items in the barter trade list”, he added and hoped that the desperately needed banking channel between the two countries becomes operational soon.