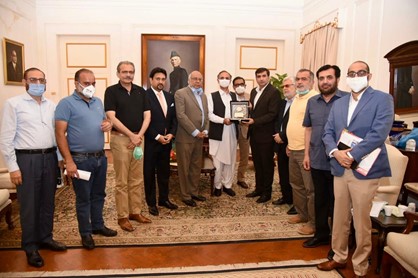 On this occasion the delegation of prominent industrialists briefed the federal minister regarding issues faced by industries in Karachi due to load-shedding of gas and electricity.

Sheikh Umer Rehan mentioned that under the leadership of PM Imran Khan country’s exports were taking a good pace but due to energy interruption it is far behind of the numbers needed for an stable economy. He also said that along with uninterrupted energy supply power tariffs should be addressed as these are one of the biggest contributors to production cost of industry and also affecting the competitiveness of our industry in international market. He also urged the inclusion of industrialists in the processes of policy making regarding energy sector in the country.

On behalf of the industrialists, Zubair Motiwala conveyed his concerns about industries in Karachi to Federal Minister for Energy Umer Ayub Khan. It was also stressed that due to interruption of energy supply industrial production has been facing tremendous amount of trouble which would adversely affect the national exports.

The Federal minister assured this delegation to resolve all energy related issues faced by industry as soon as possible.