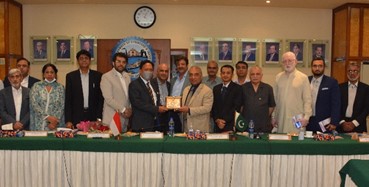 Consul General of Indonesia Dr June Kuncoro Hadiningrat has assured to strive hard for further enhancing trade and economic relations between Indonesia and Pakistan by encouraging people-to-people contacts between the two brotherly countries and fully facilitating the business community of Karachi looking forward to improving trade and investment ties with Indonesia.

Dr. June Kuncoro thought that in addition to traditional items being traded between the two countries, lots of opportunities exist for enhancing exports through diversification of tradeable goods. In contrast, there was a need to discuss and establish cooperation between the Small & Medium Enterprises (SMEs) of the two countries.

Referring to the statistics of the Indonesian Ministry of Trade, he informed that the trade volume between Indonesia and Pakistan had reached more than US$2.5 billion, and there were a lot of areas that can be explored for further enhancement of the existing trade volume.

He said that Karachi city, being the hub of economic activities, and Karachi Chamber was significant to Indonesia as KCCI was an effective platform for further promoting trade and investment ties between Indonesia and Pakistan.

Indonesian CG also mentioned that an Indonesia-Pakistan portal has also been established to facilitate trade and invited the business community of Karachi to get registered in this portal to find business opportunities in Indonesia.

Speaking on occasion, President KCCI M. Shariq Vohra stated that Karachi, being the hub of trade and economic activities, offers profitable investment opportunities and added facilities for trade, investment and joint ventures to the Indonesian business and industrial community. “Karachi city, which contributes more than 70 percent revenue to the national exchequer, is an attractive place for Indonesian businessmen, who can surely earn maximum profits by undertaking joint ventures with their counterparts here”, he said, adding that KCCI was keen to strengthen trade ties and exploring new bilateral trade prospects with Indonesia.

He also appreciated the Indonesian government for announcing 1,000 scholarships at 23 top universities of Indonesia, offering graduation, masters and PhD courses for Pakistani students, which would further improve friendly and cordial ties between the two nations.

President KCCI noted that the bilateral trade between the two countries was in favour of Indonesia as, during 2020, Pakistan exported goods worth $194.94 million to Indonesia. In contrast, the imports from Indonesia stood at $2.4 billion.

At the end of the meeting, the Indonesian Consul General and President KCCI expressed their commitment to making the Indonesia-Pakistan Portal one of the right tools in the “new normal” era with a joint effort for the national economic recovery of the two countries after the pandemic.