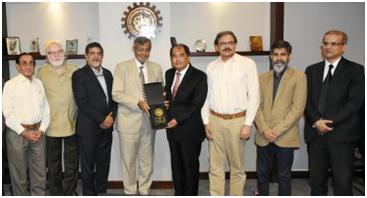 Consul General of Indonesia Totok Prianamto has said that after the reinstatement of peace in Karachi there is a lot of investment opportunity has been created in the city. He was addressing a gathering of industrialists at Korangi Association of Trade & Industry (KATI). He said that quality of Pakistani Mango is remarkable and Indonesia is going to import Pakistani Mangos on large scale. He also told that rice would also import from Pakistan and for this discussion are underway with the rice exporters association of Pakistan.

President KATI Tariq Malik welcomed the CG and briefed him about role and potential of Kornagi Industrial area in country’s industrial production. He urged to strengthen the bond between the two brother’s countries. Masood Naqi Said that Pakistan buys Indonesian Palm oil on large scale, it is needed to explore each other’s market and find new ways to expend bilateral trade volume. Zubair Chaya said that Pak-Indonesia friendship is exemplary; business to business contacts should be strong among the both countries. He said that item list should be shared for exports and imports ventures. Senator Abdul Haseeb Khan urged to direct communication between the Consulate and the industry leaders. Junaid Naqi, GulzarFeroz and Ghazanfar Ali khan also suggest measures for the promotion of bilateral trade between Pakistan and Indonesia.

The Indonesian CG said, while responding during a Q&A session in this meeting that we are looking forward to explore more opportunities in Pakistan. “We are interested in Pakistan’s Pharmaceuticals” he said. The CG also agreed the suggestion of starting direct flight between Jakarta and Karachi. CGPrianamto also invited KATI’s office bearers to attend a trade expo which would be held on October in Indonesia.