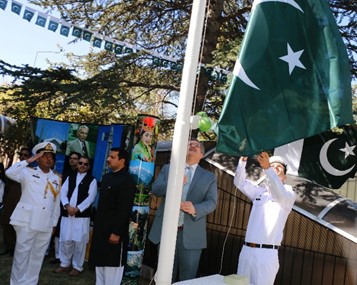 The 72nd Independence Day of Pakistan was celebrated today in Ankara with traditional fervor. The Ambassador of Pakistan, Muhammad Syrus Sajjad Qazi, hoisted the national flag on the tune of national anthem in the presence of the Pakistani community, students, and Embassy officials and their families.

The special messages of the President and Prime Minister of Pakistan were read out on the occasion. Pakistani leadership in their separate messages paid glowing tributes to the sacrifices of Pakistan’s forefathers, particularly Muhammad Ali Jinnah and Allama Muhammad Iqbal. They urged countrymen to unite which will help overcoming present-day challenges and make Pakistan a self-reliant and a true welfare state.

In his remarks on the occasion, Ambassador Syrus Qazi said 14thAugust is an important date in the history of the Sub-continent, as on this day, the dream of an independent Pakistan became a reality. The Ambassador said water scarcity was one of the major challenges faced by Pakistan. He informed that the Pakistan Embassy Ankara has opened an account in which people can donate for “Supreme Court of Pakistan Diamer Bhasha and Mohmand Dams Fund” and urged members of Pakistan community to generously donate to this fund.