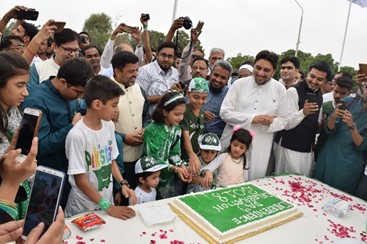 The second phase of GO Green campaign of Hamdard University was organized by University. Mrs. Sadia Rashid along with Faculty members and students planted the trees in the adjacent ground of the Faculty of Pharmacy. Later on students of the different departments took part in debates, national songs, and staged a drama in the Bait al-Hikmah Auditorium.

On 14th August, Hamdard University has celebrated the 71st Independence Day of Pakistan with full spirit of enthusiasm and zest. All faculty members, students and administrative staff were present. Flag raising ceremony was hosted followed by cake cutting Special prayers were held for the prosperity, strength and economic stability of Pakistan. Honorable Vice Chancellor and Registrar offered their greetings, and admired the enthusiastic participation of all to cherish the spirit of azaadi. They offered advice that how we can play our parts as a responsible citizen in making Pakistan an ideal state as per Quid-e-Azam’s vision. The ceremony was ended with “Azaadi March”. Everyone was showing patriotism, a number of children also came along with their parents. Excitement level was on peak, almost all were dressed in Green and White colours of the National Flag, sweets were distributed, the beautiful environment bounded by faith, unity and happiness of freedom was enjoyed by everyone.

CAPTION: – Children cutting the cake on the occasion of 71st Independence Day at Hamdard University Prof. Dr. Shabibul Hasan, Vice Chancellor Hamdard University and Dr. Waliuddin, Registrar and other faculty members are present on this occasion.