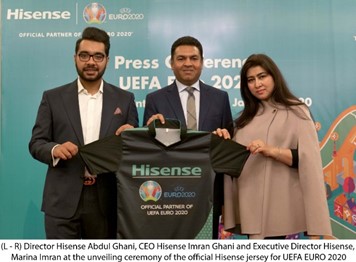 Tri-Angles Electronics (Pvt.) Ltd. – the official manufacturers and distributors of Hisense LED in Pakistan today unveiled their plan for one of the most anticipated and mega football event, the ‘UEFA EURO 2020’ which is scheduled to kick-off from June 12, 2020 with the Final scheduled to be played on July 12, 2020.

While Hisense Appliances and LED TV is the official global sponsors of EURO 2020, it aims to extend its strengthened on-field presence by promoting football in Pakistan. And to commemorate the initiative, Hisense unveiled its plan for the UEFA EURO 2020, which is set to create a unique opportunity for its fans in Pakistan to stay updated with the latest happenings and be a part of the mega football event. Hisense also showcased the official kit for Euro 2020 in Pakistan, reflecting Hisense UEFA Euro 2020 brand guidelines and the experiential values, it plans to offer to millions of football fans in Pakistan.

It is pertinent to mention that the Chinese consumer electronics giant has previously also filled the position to be a Global Partner at the UEFA Euro 2016 and FIFA 2018 respectively.

Speaking at the launch ceremony, Chief Executive Officer, Hisense, Mr. Imran Ghani said, “It gives me immense honor and delight to announce our plan for the UEFA EURO 2020 in Pakistan – where the love and craze for football does not settle. Hisense is privileged to strengthen its presence for promoting domestic football in Pakistan over the last few years and major contribution as sponsors in mega event such as UEFA EURO 2016, FIFA WORLD CUP 2018 and now the UEFA EURO 2020.

Adding to Hisense contribution towards the promotion of football in Pakistan, he added, “Until recently the Hisense LED TV Road to Euro 2020 has kicked off from three back-to-back campaigns namely with F5WC, FutGoal and Leisure Leagues. The objective of these collaborations is to promote domestic football and encourage new talent emerging from grass-root level. We are also in talks with Pakistan’s leading sports channel and will very soon make an announcement on our collaboration for the UEFA EURO 2020 as official media partners, so the viewers do not miss the live action of the month-long mega event.”

As part of the major announcement and consumer promotions, Mr. Imran Ghani said, “Hisense will announce 3 lucky winners who will get a chance to win tickets of UEFA EURO 2020. Moreover we will also send our Top 3 dealers who achieve best sales”.

Hisense Appliances and LED TV is known for its quality and got ULED series as high end and latest introduction on laser TV 100. The new model range for 2020 is also updated with the latest technology as per user preference and market needs.