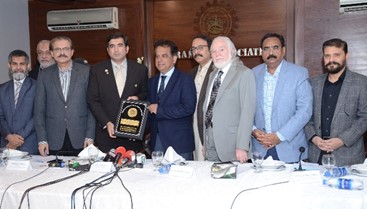 Commissioner of Karachi Iftikhar Sahllwani has said that heavy investments in water, transportation and solid waste management sector of the city become a need of time. He was speaking to a gathering of Industrialist arranged by Korangi Association of Trade & Industry (KATI) here on Wednesday.

Commissioner of Karachi was of view that there is an urgent need to invest in basic civic utilities such as water supply and sewerage, transportation and solid waste management sectors, “Public Private Partnership model should be follow in this” he added. While responding to concerns of industrialists the commissioner supported the suggestion of privatization of Karachi Water & Sewerage Board. He told that in his first report submitted to water commission he suggested that due to its flaws and discrepancies at least the water distribution system should be privatize to address the concerns of citizens.

Prior to this President KATI Sheikh Umer Rehan briefed the commissioner regarding the issue faced by industries in Korangi Industrial Area. He expressed grave concerns over bad performance of KWSB and suggested that the only solution to put this institution on right path is privatization. He said that despite availability of water industries had be deprived of supply for vested interests. He applauded the performance of the commissioner for dealing with challenges faced by Karachi.

He also said that on many spots roadside eateries had been established on illegally encroached spaces, these are causing increase in street crime and other issue in the area. Zubair Chhaya urged the commissioner to normalize the level of Malir Riverbed alongside Korangi Causeway. He told that after 1985 first time in the recent history the causeway was blocked thrice during the rains just because of uplifted level of riverbed due to dumping of garbage and debris in the vicinity.

While responding to the concerns raised by KATI’s leadership the commissioner said that any sort of dumping wouldn’t be allowed alongside EBM Causeway in Malir Riverbed. He also assured that measures to bring back the level of Malir Riverbed would be taken soon. Mr. Sahllwani said that there is clear direction of Supreme Court regarding action against encroachments. He said that SC ordered to evacuate the land allocated for parks, footpaths and amenity plots despite the stay-orders of High Court. He told that an agreement had been reached with cabal operators and incidents of electrocution would be preempt until the next monsoon. He also said that projects of City’s beautification with partnership of private sector are underway. Former Presidents of KATI Danish Khan, Farhan Urrehman, SM Yahya , Nadeem Khan and other also attended the occasion.