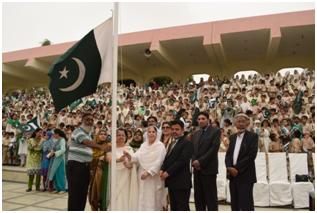 Speaking on the occasion after hoisting the national flag along with Mrs. Sadia Rashid, President, Hamdard Foundation and other guests, the Chief Guest and former federal law minister, Barrister Shahida Jameel said: ‘Islam is a religion of peace and reconciliation and independence day teaches us the lesson of brotherhood and unity.’

Before the advent of Islam there was no peace, accord, mutual love and fraternity among the people of the Arabia. But after Islam they had not only become like real brothers but also selfless people who were always ready to help others and that was the impact of Islamic teachings, she said, adding that this country of Pakistan was achieved through tremendous sacrifices, made by our elders.

She said, if we didn’t live united and peacefully, naturally our enemies would take advantage out of this bad situation as they did in the past and would harm us, so we should shun our petty differences and become a solid nation by following the principle of our Quaid: “Unity, Faith and Discipline”.

We should take care of our national flags after the celebrations of Independence Day and don’t let them waste at dirty places on streets and ground, she advised the children and suggested to the school’s administration to appoint a music teacher, because it was the music and musicians who gave us thought-provoking and enthusiastic national songs during the 65 and 71 wars.

Dr. Khalid Nasim, Administrator, Hamdard Public School and Hamdard Village School offered vote of thanks. The function ended on dua-i-Said, in which guests, teachers and children in a large number attended the function.