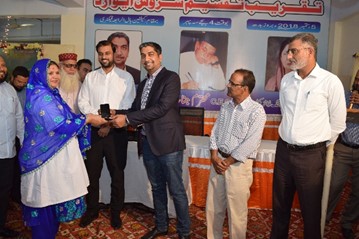 Speaking on the occasion, Usama Qureshi said that good relationship between administration and CBA would invariably result in betterment of the company and the workers as well. The best way to show loyalty with the institution was to comply with the responsibilities, assigned by the administration to workers, with complete sincerity, he added.

He said when he joined Hamdard he came to know that the ‘Service Award’ is given on the retirement to an employee. But he was of the view that it should be given in service time in an organized function and with due respect.

‘So, we have organized this first awards distributing ceremony and awards are being given to workers in their service time, he said, adding that whatever we have done during the last near about two years for the betterment of workers all is based on generosity and large-heartedness on the part of Hamdard’, he maintained.

‘I expect that all workers of Hamdard would leave no stone unturned to discharge their duties with entire honesty, sincerity and hard work’, he anticipated.