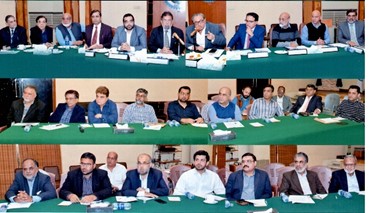 Chairman Businessmen Group (BMG) & Former President Karachi Chamber of Commerce & Industry (KCCI) Siraj Kassam Teli has stressed that the PTI government must honor all its commitments made during a meeting with KCCI’s delegation on December 4, 2018 in Islamabad which was followed by another meeting with PM’s Advisor Razzak Dawood during his visit to Karachi Chamber on December 8, 2018.

He said that none of the commitments by Federal Finance Minister Asad Umer, PM’s Advisor Razzaq Dawood, State Minister for Revenue Hammad Azhar and others have been fulfilled so far. All the measures taken up till now have increased the cost of doing business and the direction does not seem to be right as it has triggered more inflation.

“The strategy to control inflation by raising the interest rates is not appropriate and they should follow the supply side economics by taking growth-incentive measures that would lead to rising revenue. Instead of increasing indirect taxes, they should focus on direct taxes and the ratio between direct and indirect taxes should start changing toward more on direct taxes”, he added while speaking at a meeting held at KCCI to discuss the Mini Budget to be announced by the Federal Government.

Chairman BMG further said, “We are in favor of incentives to export oriented industries but other industries are also equally important as they produce import substitution and generate huge revenues. The utility services being provided at two different rates have created a divide between the export-oriented industries and the general industries which will create more problems as the two segments would work against each other in future.

Siraj Teli feared that the government’s announcement to impose additional new taxes of Rs155 billion will be generated by squeezing the existing taxpayers which is totally contrary to PTI’s policy. “The exports will only increase if proper infrastructure and utilities including gas, electricity and water are provided to industries round the year on 24/7 basis”, he opined, adding that by not following the constitution and its Article 158 was sheer discrimination with industries in Karachi.

Chairman BMG urged the government that prior to announcing the Mini Budget, the decision makers in Islamabad must sit with the representatives of Karachi Chamber and thoroughly explain the government’s plans for imposing additional taxes so that KCCI could guide them well on where and how to apply these taxes.

He was of the opinion that FBR was misguiding the present government which was clearly visible in the steps taken during the past three months. “More discretionary powers have been transferred at lower level through SRO 1301 which was shown to Finance Minister Asad Umer and Minister of State for Revenue Hammad Azhar during a meeting with KCCI representatives in Islamabad on December 4, 2018 and it was really upsetting to know that the Ministers were totally unaware about it”, he added.

He said that these discretionary powers along with enhancement in Customs Duties and Regulatory Duties (RDs) were actually not increasing the revenue to the required level instead corruption was rising every day.

Siraj Teli said, “Anything implemented in the next Mini Budget under the dictates of bureaucrats might lead to something more disastrous. KCCI wants to see PTI government succeeding and making corrections but those government officers, who are involved in many wrongdoings and corruption, would certainly create hurdles in order to hold back the government as ultimately save their own neck.

He underscored that the entire industry should get highest priority and the benefits should not remain confined to exporters only because the rest of the industries are also equally important which contribute huge amount of taxes as compared to what is being contributed by exporters. “We accept that the exporters earn dollars and they should be given incentives but not by way of creating segments in utilities’ rates”, he added.

“The discrimination between general industry and export-oriented industry is an attempt to divide and rule which has been adopted during PTI’s government. No other government has adopted such a method of giving incentives to exporters only and depriving rest of the industries who provide millions of jobs and contribute huge amount of taxes yet they have to face gas, electricity and water shortages along with other injustices”, he opined.

Chairman BMG further stated that since PTI government has assumed charge of the country’s affairs, corruption has been rising instead of descending which can be gauged from the fact that a lot of commodities were not being imported in Pakistan anymore due to high taxes and RDs but the local markets were over flooded with such goods including betel-nuts, coconuts, dry milk, cardamom, tea, electronic items etc. due to widespread smuggling and massive corruption.

He suggested that instead of inflating prices of imported electronic items and other such goods, the government should impose complete ban on all luxury goods for a period of one year to reduce fiscal deficit while they should strictly follow supply side of the economics. “The inflation cannot be brought down by raising the interest rates and choking the business and industrial activities but growth-incentive measures have to be taken that would lead to improved revenue”, he added.

President KCCI Junaid Esmail Makda, while referring to the visit of Minister for State for Interior Shehryar Khan Afridi to KCCI on October 15, 2018, stated that during the said meeting, the Minister assured that all 18 departments under the Federal Ministry of Interior will work closely with Karachi Chamber to resolve numerous issues but more than two months have passed so far and the relevant notification is still awaited.