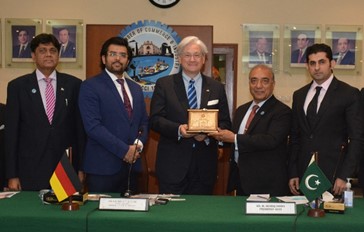 Consul General of Germany Holger Ziegeler has said that although Pakistani exporters have been sending mostly textile, leather and some other products to Germany but they must make good use of human capital, develop industries and produce high-value products for more exports to Germany and other countries.

Exchanging views at a meeting during his visit to the Karachi Chamber of Commerce & Industry (KCCI), German CG reiterated that Pakistani exporters should not remain limited to producing raw material or semi-finished goods for exports but they must also be able to produce all classes of the entire value-chain of not just textile sector but other sectors as well. “You must look at the region and see how your competitors like Bangladesh and others have improved their exports to Germany and other countries”, he added.

German Envoy informed that prior to assuming charge as Consul General in Karachi, he served as Consul General in Jeddah for four years and before that he was Head of Export Promotion at the Ministry of Foreign Affairs in Berlin and then preferred to get posted in Karachi because of the economic importance of this port city and because of the potential this city has for development of bilateral trade with Germany.

“Instead of getting posted in any other city or country where Germany’s trade is already at a certain height, I prefer to get posted at places where possibilities as well as difficulties are great so that I could play the role as a diplomat in overcoming all those obstacles”, he said and assured his full support and cooperation to Karachi’s business community looking forward to strengthening trade ties with Germany. “We see ourselves as facilitators for those who make the country grow”, he added.

He said, “We are also suffering right now from the absence of trade fairs and absence of possibilities of travelling to Germany or other countries due to the pandemic. We hope that with the help of protective measures and the vaccines, of which one of the most efficient one has also been developed in Germany, we may soon able to travel again”.

In response to a question, German CG said that joint ventures between the business communities of Germany and Pakistan were possible as soon as we start visiting each other again. “In this regard, we have to deal with the first step which is the fear of entering into Pakistan due to security concerns. I will try my best to bring German businessmen here and once they are here, it’s your game to make them partners.”

Earlier, President KCCI Shariq Vohra, while highlighting the performance of most developed agricultural and automotive sector of Germany, stressed the need for collaboration through joint ventures in both these sectors as most of the agricultural products being harvested in Germany were also being farmed in Pakistan while the automotive sector here also has a lot of potential hence, German business community must come forward, improve ties and explore investment opportunities in Pakistan. “Although Germany is capable of offering so much to Pakistan but unfortunately, we have not been able to take advantage of what is being offered which is something that needs special attention”, he added.

He also appreciated Germany’s constant support to Pakistan in the form of aids and grants for various socio-economic development projects and also the vocational training initiatives which helped a lot in further improving the skills of Pakistani workforce and proved favorable for the economy.