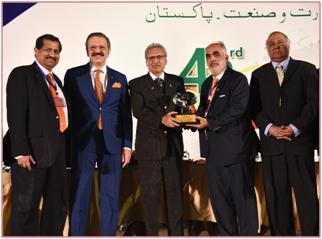 During the ceremony, 45 companies received award in exports of pharmaceutical, herbal, textile, leather, construction, petroleum products and other sectors.

While congratulating the award winners, Dr. Arif Alvi President stated that Pakistan had huge opportunities of investment which need to be explored and exploited for economic development. He indicated that the Ease of Doing Business has been improving in Pakistan which reflects the investment environment of Pakistan and the present government is very much keen to improve its trade and economic relations with Muslim world. He emphasized on enhancing the exports of Pakistan through E-Commerce which will enhance competition and reduce transaction cost and facilitate the large companies as well as Small and Medium Enterprises.

Engr. Daroo Khan Achakzai, President FPCCI welcomed the chief guest and participants and stated that private sector plays a crucial role in the economic development, enhancement of trade and employment generation. He added that the promotion of economic linkage within the Muslim communities by creating opportunities is the need of the time that could help generate greater flow of capital from within and beyond the Islamic world. He congratulated the Award winners and hoped that they will continue their efforts for enhancing exports of Pakistan.

Mr. Mustafa Rifat Hisarciklioglu President TOBB (Turkish National Chamber of Commerce & Industry) in his address highlighted the history of Pakistan and Turkey efforts for enhancing of trade and economic relations between both nations.

Prior to the Ceremony, FPCCI organized an Investment Bridge on Exploring Opportunities Integrating Business (Among Muslim World) for highlighting the investment opportunities which were graced by Chief Minister Baluchistan Jam Kamal Khan. On the sideline, FPCCI also organized an exhibition of Islamic Art and Culture and Second meeting of Turkey Pakistan Chamber of Commerce and Industry, Inauguration of Pakistan-Jordan Joint Business Council of FPCCI and B2B meetings of Pakistani businessmen with foreign delegates in textile, construction, leather and other sectors.