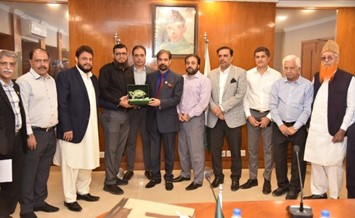 Mr. Irfan Iqbal Sheikh, President FPCCI, has called for immediate policy interventions and resolution of anomalies pertaining to tea imports. He has explained that tea should be considered a necessity &a basic food item for everyone – and, not a luxury; as is the case as per current practice at the import stage.

Mr. Irfan Iqbal Sheikh maintained that tea traders are suffering due to various anomalies & weaknesses in policies and regulations. Tea is taken as a finished product at the import stage; but, as a matter of fact, it is a raw material – which is then processed, blended, packaged and marketed.

FPCCI Chief added that, given the socioeconomic structure & labor-class dynamics, most of the tea is consumed in Pakistan with plain staple foods like roti or paratha by construction workers, factory labor, daily wagers and other lowest of the lowest strata of the society. Therefore, it calls for facilitative and enabling environment for the business community to keep the prices low & stable.

Mr. Irfan Iqbal Sheikh has emphasized that the government should facilitate tea traders to keep the prices of tea at the lowest possible level; while ensuring the best quality &availability. He explained that the government should not set the maximum retail price at import stage or customs basis for the unblended tea and MRP should only be set for tea bags or final packaged product at the import stage. Setting MRP at import stage for unblended tea makes no economic, commercial or regulatory sense, he added.

Mr. Zeeshan Paracha, Chairman of Pakistan Tea Association, led the delegation of tea traders to FPCCI and called upon the President of the apex body. He apprised the consultative session with FPCCI that the tea traders of the country propose a Free Trade Agreement (FTA) with Kenya in this regard to streamline the tea trade in the broader national interest.

Mr. Aman Paracha, Chairman Customs Committee of Pakistan Tea Association, highlighted the issues being faced by rest of the tea trade players in Pakistan at the hands of the misuse of exemptions & quotas of erstwhile FATA & PATA. He demanded that misuse of the exemptions should be eliminated and all consignments under that arrangement should have tracking in place.

Posted in Import and Export News.