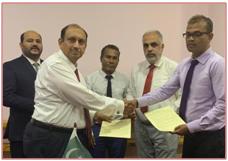 He was accompanied by Vice President FPCCI Muslim Muhammedi. During the visit, they met with the businessmen of tourism, resorts, construction, sea food and edible and non edible items etc and also finalized the first trial order of Dry Fruits for Maldives.

During the visit, the President and Vice President FPCCI held a meeting with Office Bearers of Maldives National Chambers of Commerce and Industry (MNCCI) and discussed the matters of mutual interest particularly related to enhancement of trade ties and cooperation in various potentials areas particularly fisheries, tourism, construction etc. Both National Chambers also agreed for establishment of Joint Business Council for enhancement of B2B interaction, participation in trade fairs and exhibitions, exchange of regular business delegations etc.

Both National Chambers also entered into an Memorandum of Understanding (MoU) and agreed to intensify cooperation in trade, investment, technology, logistics and transport, strengthening the exchange of information and participation of commercial activities of each other country. The MoU was signed by Vice President FPCCI Muslim Muhammedi and Vice President MNCCI Misr Adam in the presence of President FPCCI Engr. Daroo Khan Achakzai and President MNCCI Ismail Asif.

In a press statement, the President FPCCI Engr. Daroo Khan Achakzai stated that Pakistan and Maldives both are the members of SAARC and OIC but their trade and economic relations is below the potentials due to weak connectivity and lack of interaction. Maldives is one of the growing economy depending on tourism and fisheries sector. He further stated that 99% of Maldives population comprises Muslim which indicates the potential of exports of halal products. While quoting the statistics, he added that the bilateral trade between both nations stood at US$ 5.9 million and contributed less than one percent in trade of both nations. There are huge exports potential available for Pakistan in cereals, edible fruits, vegetable, meat, textile, leather, surgical instrument, pharmaceutical goods etc.