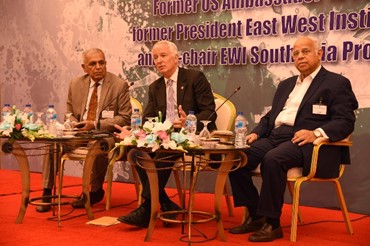 Discussing geo political pivot in the region in detail, Mr. Cameron Munter, former Ambassador of United States of America (USA) in Pakistan said on Monday, during function hosted by KCFR in local hotel at Karachi. He emphasized that Pakistan will have to implement smart diplomacy as neighbors cannot be changed.

Although it is very hard for Pakistanis to reconcile with India in current scenario but they should try to.

He was addressing members of the Karachi Council on Foreign Relations (KCFR) at a breakfast dialogue, which was hosted in his honour by the council here at a local hotel. Ikram Sehgal, Chairman KCFR and Commodore Retd. Sadeed A. Malik, Secretary General also spoke on this occasion.

Cameron Munter, also former President of the East West Institute, said that Pakistan should solve its disputes with India. India has also domestic issues. Pakistan should focus its domestic issues like tax growth, education etc. Kashmir issue is very important but this should not prevent Pakistan to focus its domestic agenda. The world countries have condemned India for atrocities in Kashmir but for this issue, relations between the two neighboring countries should not be halted at all, he stressed.

Pakistan should also understand that it may take long to settle this issue and both countries have to move forward despite this tough time. We know that owing to this situation, it is very difficult for Pakistanis to love India but they should try to. I hope this situation will not escalate further to reach a point to even consider atomic misadventure. Nuclear war cannot be  handled, former ambassador hinted.

Cameron Munter further said that Kashmir issue is same like Mexico had with USA. Mexico remained an issue for USA and we had to listen to them. Along with Kashmir, Pakistan should not ignore its local issues of tax reforms, education, justice etc.

President USA Donald Trump and Prime Minister Pakistan Imran Khan now have good chemistry, which is an encouraging sign as leaders. Imran Khan has earned a good image in USA by his speech. It is just a beginning and he hoped this will put relations between the two friendly nations on better stage again, he added.

Responding to a question from audience, Mr. Munter accepted that yes it is fact that many countries have their economic interests in India likewise Pakistan has with China. But Pakistan will have to play it very sensibly and should not stick to any side. Pakistan should honestly think about what China is going to offer it and how this will impact its culture. There are good cultural relations between USA and Pakistan. Around one million Muslims are in trouble in China and they are reeducating them but Prime Minister Imran Khan will not be interested to talk on it because China is friend of Pakistan. USA is also a friend of Pakistan. Sometimes, leaders have to make unpopular decisions, he repeated.

I want to say to my Pakistani friends that it is another good opportunity to make relations with USA better as it wants prosperity and stability of democracy in Pakistan. Donald Trump is not thinking for the benefit of Pakistan but for his own Americans, however human rights, women rights and environment issues are also important, the former ambassador suggested.

Appreciating speech of Prime Minister Imran Khan, Cameron Munter termed that it put a good impression in USA. This is a first step and he hoped it will help to improve relations between two countries, he concluded.

Ikram Sehgal, Chairman KCFR terming Cameron Munter as a good friend of Pakistan said that people of such stature can take our perceptions to the world. He also lauded speech of Imran Khan and said that it honoured all Pakistanis internationally. Cameraon Munter also appreciated his speech which is a good sign, he added.

Cameron Munter was presented with Jinnah Anthology, a book by its author Liaquat Merchant, the grand Nephew of the Quaid, along with Ikram Sehgal on the conclusion of the ceremony.