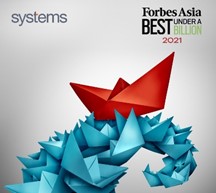 Systems Limited continues to dominate Pakistan’s global technology landscape in the year 2021 as it bags its consecutive Forbes Asia’s Best Under A Billion Award. The list highlights 200 Asia-Pacific public companies under $1 billion in revenue, with consistent top and bottom-line growth parameters. This is the second time in a row Systems Limited has been included in the esteemed list. The achievement is of utmost importance for the company as it stamps authority over its consistent composite scores that showcase their overall track record that includes sales and profit growth, low debt levels, and robust governance.

CEO and Managing Director of Systems Limited Mr. Asif Peer was elated on this momentous occasion, he stated, “Systems Limited has been able to deploy an inclusive ecosystem that is able to maintain tremendous performance parameters. It’s a great honor and a privilege to lead this organization to its second consecutive inclusion in Forbes Asia’s Best Under A Billion”.

Mr. Peer further added, “The fact that Systems Limited was included the second time on the list speaks volumes of our approach towards customer centricity, employee ownership, inclusivity, and persistence. I would like to congratulate the entire team including all the employees, stakeholders, partners, principals, and our shareholders who remain loyal to us.”

Expressing tremendous pride in this achievement, Asif Peer envisions heights never summoned before for Systems Limited in the future, “It’s the collective effort of employees, management, and leadership guardians, that we’re able to ace this amazing achievement.”

Systems Limited holds the distinction of being one of 2 companies and being the only technology company from Pakistan to be included in the esteemed list for two consecutive years. Systems Limited was honored for outstanding business achievement as it joins the 2021/2022 Inner Circle for Microsoft Business Applications and made it to the top 1% of global Technology Partners for Microsoft Business Applications. Furthermore, Systems Limited became Pakistan’s first technology company to cross PKR 100 billion Market Capitalisation. The Forbes Asia Best Under A Billion Award will further assert Systems Limited as the brightest star of Pakistan’s IT industry. Systems Limited’s dominance also got acknowledged by the Government of Pakistan, as it won the President IT Award.

Forbes Asia’s Best Under A Billion applies a mix of quantitative and qualitative criteria for screening, such as excluding companies with serious governance issues, questionable accounting, environmental concerns, management issues or legal troubles. State-owned and subsidiary companies were also excluded.

The full list of companies can be viewed here: https://www.forbes.com/asia200/list/#tab:overall