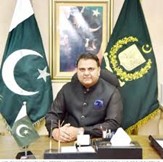 He said that implementation of the RTI Act would ensure transparency in the governance and help fight corruption.

Access to Information was vision of Prime Minister Imran Khan and Khyber Pukhtoonkha was the first province to take infinitive in this regard, he said adding the transparency would prove to

be a catalyst in curbing the scourge of corruption from the country.

He said that all information about issuance of advertisements to newspapers will be available soon. Fawad said that if the relevant department does not give information in time, the commission

will act and take action.

the media and general public.

He said that in the past the governments did try to cover up details of the projects from the media and general public.

He said when the PTI legislators raise the use of over a trillion rupees, released for Balochistan during past ten years, the opposition which was in power then, makes hue and cry and claims that

democracy was in danger.

He castigated PML-N for its demand of giving chairmanship of Public Accounts Committee to Shahbaz Sharif to audit the projects of his brother and then prime Minister Nawaz Sharif, which

was against the spirit of justice and accountability.

He said when PTI demanded to open four constituencies for rigging after 2013 election, four years lapsed in accepting this demand, whereas the PTI government accepted the PML-N demand

About 100 days achievements of his ministry, he said that besides activation of RTI Act and formation of Federal Information Commission, Media University was being set up. Moreover, he said that censorship on state media was abolished and Radio Pakistan and Pakistan Television Corporation were being revamped and the APP would be digitalized.

He said that Pakistan Media Regulatory Authority was being constituted to regulate print, electronic and digital media. Similarly, he said a transparent advertisements policy has been formulated which would be implemented after input from stakeholders.

Replying to media questions, he said that there was a need to bring innovations in the curriculum of media universities to meet requirements of changing times.

To a question, he said that in India, elections are due next year and their statements should be seen in thta perspective. He said that “Indian government is in election mode and we know

the importance of elections.”

He said that on November 29, Prime Minister Imran Khan would brief the nation on the achievements of first 100 days of the government.

He said that a good foundation had been laid during hundred days and hoped that there would be positive developments in days head.

He said in the past, no one paid attention to 250,000 students of the seminaries.

Fawad said when PTI came to power, the biggest challenge was balance of payment as the previous government had rendered the country virtually bankrupt.

Earlier Chief Information Commissioner Muhammad Azam said that right to information acts had been introduced in 111 countries in the world. In Pakistan, he said it was introduced

under Article 19-A of the Constitution which makes it as fundamental right.