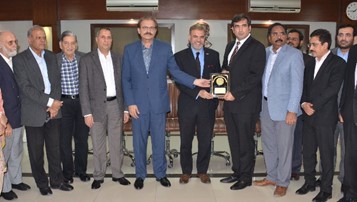 Chief Commissioner Inland Revenue (IR) of Federal Board of Revenue (FBR), Dr. Aftab Imam has applauded the industrialist and business community for their cooperation for tax collection despite the troubled economic condition. He was speaking to a gathering of industrialist at Korangi Association of Trade & Industry (KATI) on Monday.

Dr. Aftab Imam has said that cooperation of Business community is appreciable and also well needed for more expansion in tax net. He told that more than 1 billion rupees of tax refund had issued to exporters. He underscored the role of business community and industrialist for improvement in tax policy and procedures. Dr. Aftab said that the top most priority of FBR is to expend tax net of the county but also reforming tax regime to provide viable environment for growth of industry and business as well.

President of KATI Sheikh Umer Rehan said that there is need to incentivize taxpayers to gain confidence of new taxpayers, it would also help in expending tax net. He also mentioned that for healthy competition tax policy should be similar for all industries. Zubair Chhaya was of view that to establish a tax culture awareness campaign should be launched to educate people about importance of taxpaying. Rashid Siddqui said that thriving industry is a prerequisite for economic stability and refunds are like running finance for the financial support of the industry, an automated mechanism should be in place for timely issuance of tax refunds of the industry. Zahid Saeed said industrialist were in full support of documentation of economy. Masood Naqi highlighted the valuation problems due to smuggling and urged to consider them as priority. Former Presidents of KATI Ehtisham Uddin, Akbar Farooqui, Sheikh Basit Akram and other also attended the meeting.