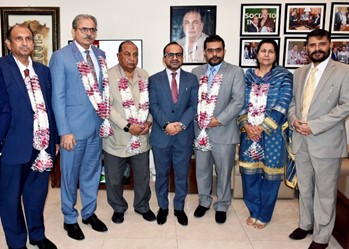 Patron-in-Chief of KATI SM Muneer hoped that Faraz-ur-Rehman, Nighat Awan and Muslim Mohammadi would play a key role in developing the Korangi Industrial Area and the improvement of the economy.

Salman Aslam, the outgoing President of KATI, expressed full confidence in Faraz-ur-Rahman and said that a talented person like him is needed to continue the journey of the development of the Korangi Industrial Area. He said that all the officials are highly educated, have extensive business experience, and possess excellent management and leadership skills.

The newly elected President of KATI, Faraz-ur-Rahman, thanked the Patron-in-Chief SM Muneer and all the members and said that he will make every possible effort to fulfil their trust. After taking over as the President of KATI, SM Muneer’s vision, guidance and tradition of serving the business community will be further advanced; he will make all efforts for the betterment of the Korangi industrial area.