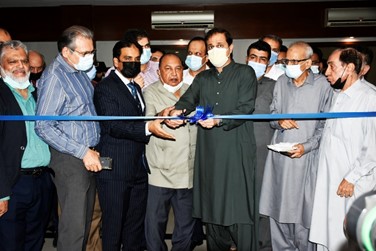 Government of Sindh Spokesman, Advisor to CM on Environment and Law Barrister Murtaza Wahab said, Teams will go to the industries located in the industrial areas of the city and vaccinate the workers against corona. The majority of people in Karachi work in industrial areas, which is why the Sindh government has decided to introduce corona vaccine in collaboration with industrial associations. He expressed this while inaugurating the Corona Vaccination Center at Korangi Association of Trade and Industry (KATI).

Barrister Murtaza Wahab also added that, Sindh government has so far set up 234 corona vaccination centers in which people are getting free vaccines against COVID-19. Korangi Industrial Area is one of the largest industrial areas in Karachi, which is why Sindh government decided to setup vaccination centers in collaboration with KATI, to reach out to as many industrial workers as possible.

2 months ago the infection rate in Sindh was 2% but last week it was 14% in Karachi, 10.8% in Hyderabad and 7.7% in Sukkur which suggests that the spread of corona has not stopped yet. If government announces ease in lockdown which makes people hesitant to adopt Corona SOPs, he added.

Murtaza Wahab further said, People are not giving priority to Government SOPs, wearing masks, maintaining social distance and getting vaccinated which helps spread the epidemic fast. There are many rumors circulating about the vaccine. We have seen on social media that after getting vaccinated the body become magnetic, some are spreading rumors that people gets electronic chips under the guise of vaccines, which is completely baseless.

Business leaders, organizations and media should promote the trend of getting vaccination among the people. In the forthcoming Budget special projects are being allocated for industrial areas, especially for the shifting of Korangi Combined Effluent Treatment Plant to solar energy.

Earlier, Patron-in-Chief of KATI, SM Muneer welcome Barrister Murtaza Wahab, he said, Sindh Government was taking key steps to prevent COVID-19, and the Government of Sindh’s initiatives against Corona had been very effectiv.

CM Sindh Murad Ali Shah had formulated a successful strategy to prevent corona virus which kept the spread in Sindh under control during the third wave, however, people did not implement SOPs to prevent corona during Ramadan, he added.

SM Muneer further added that CM Sindh Murad Ali Shah and his team deserved praise for taking timely steps to make the vaccination process easier and more transparent among the masses. The government has more than 12.5 million vaccines, but the people are reluctant to vaccinate.

On the occasion, President KATI Saleem-uz-Zaman said that the vaccination center was set up in KATI in collaboration with the Government of Sindh and the Ministry of Health Sindh, in which Sindh Govt Spokesman Murtaza Wahab played a key role while District Health Officer Dr. Jamil Ahmed Sheikh, Deputy Commissioner Irfan Salam was in the forefront.

Decision to set up a vaccination center in Korangi was taken at the end of Ramadan and started on May 17 in which more than 550 employees of Korangi industrial area have been vaccinated so far, further added.

Saleem-uz-Zaman said that with we want to further expand it so that more doctors and staff can be deployed in 3 shifts if required while door-to-door sampling will be further enhanced.

While speaking on the occasion, KITE CEO Zubair Chhaya said that he was grateful to the Sindh Government for providing KATI with the opportunity to setup vaccination facility for Korangi employees. The police department has also been very supportive in this endeavor and since the establishment of the center, the police personnel have been performing their security duties efficiently.

He also saluted President KATI Saleem-uz-Zaman who worked tirelessly to vaccinate Korangi employees and set up a vaccination center in collaboration with the provincial government. Zubair Chhaya also welcomed the decision of the Sindh government to send teams of Ministry of Health to the industries of Korangi in order to vaccinate the employees.

Deputy Commissioner Korangi Arfan Salam expressed that initially people were reluctant to vaccination due to rumors, while vaccination is very important for all of us. In this regard, 6 centers including KATI Vaccination Center have been set up, while 6 more centers are yet to be set up.